Pope Apologizes —But Nothing Changes 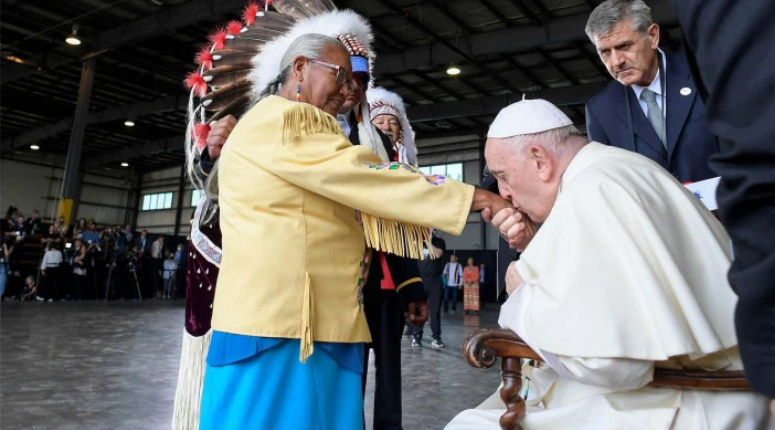 
Pope Francis spent a week of his summer in Canada on what he called a “penitential pilgrimage.” He came to offer an apology for “evil committed by so many Christians” in Canada’s residential schools. The schools were a product of the effort by the government and religious leaders to convert the indigenous people to western culture.

Very young children of the native tribes were forced into these institutions largely supervised by Roman Catholic nuns and priests. Funding came primarily from government programs. Of course the first “evil” was ripping these children out of their families, presumably to save them from the “heathen” nature of the tribal worship.

But since Catholicism is Christian in name only, the environment in the schools further contributed to the “evil.”

To put a human face into the middle of this atrocity, Reuters reporter Brad Brooks traveled to an American version of one of these residential schools that was operated by Roman Catholic leadership in South Dakota until 1975. His primary contact was Geraldine Charbonneau Dubourt who had been one of nine girls taken from their parents in 1955. She tells her graphic tale of psychological, physical and even sexual abuse.

Inappropriate touching began almost immediately by both nuns and priests. She remembers multiple rapes, by a priest in the basement of the school, that eventually led to an abortion. All the while there were rigid rules and rituals with little caring and emotional support.

For her, an apology, even by the Pope, is not enough. In her later years she has spearheaded an attempt by many other members of her tribe, who were similarly treated, for justice. Unfortunately, by the time she was able to get some momentum going, she had outlived most of the perpetrators. She also claims that legal statutes of limitations were changed to protect those Catholic institutions in charge of the schools.

Sadly, this scenario of governments’ involvement in social and religious experimentation was widespread during the “settlement of the west.” But it seems like the pope’s troupers were always there and ready to expand the spiritual bondage of the native peoples.

This sad story is only one more chapter illustrating what happens when a counterfeit church gains government power to replace the gospel with pagan rituals.

However, there is some evidence that true Bible believers were concerned enough to take the gospel to these people where they lived, without transplanting them to unfamiliar surroundings and breaking up the families. Men like John Eliot, David Brainerd, and William Carey went and lived with the natives and translated the Bible into their languages. They established churches and encouraged education and leadership in commercial enterprises.

This is another example of the evils of the counterfeit “church” headquartered at the Vatican. Under the pretense of sharing the good news about Jesus they, instead, promote a lifetime of bondage to rituals that they claim are necessary for eternal life. As during the inquisition, the popes watch for opportunities to piggyback on civil government to promote their system of domination.

Placing these children under the control of unmarried priests and nuns left them devoid of the nurture provided in a normal family. The carnal temptation to power and domination in this situation was left unchecked.

For years, Chick Publications has provided tracts and books exposing the unbiblical deceptions of Roman Catholicism. Today, they masquerade as just another denomination with a little different worship style. This is a smokescreen and needs to be exposed with the clear light of the Bible. The Vatican and its history clearly matches the description of the prostitute church in Revelation 17 and 18.

Other Articles from September/October 2022: