Anyone Over Six Feet Gets One of These 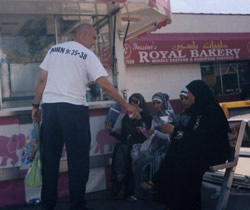 Tim Berends passing out tracts in his, "I Love Muslims" T-shirt.

Tim passing out tracts to vendors at a Muslim festival in Dearborn, MI.

If the person is wearing a cap of a baseball team, Tim will say, "Everyone tonight who likes the Dodgers, gets one of these," and offer a copy of the tract, The Slugger. If he spots someone who, like Tim, is over six feet tall, he will say, "Everyone tonight who is over six feet, gets one of these." An M&M T-shirt or "good looking" dog also works.

He picked that spot because of the variety of peoples who come across it. "I don`t have to go to the foreign mission field. The world comes right here," says Tim. He keeps copies of Is Allah Like You? to use when a Muslim comes by.

When asked, "What is this?" he will reply: "It`s a love letter for the Muslim people." If he refuses, sometimes the wife, walking behind the man, will furtively reach for the tract and quickly pocket it for future reading.

Tim says at first he shied away from giving tracts to children, but decided if they were old enough to go to hell, they should hear the good news of the gospel. So he will say, "Be sure your parents get to read this," as he hands the tract to the youngster. Often this will get the parents to allow the child to accept it.

Tim admits that Las Vegas is one of the hardest places to get people to take tracts with only about a 30% acceptance rate. But it is his home base and convenient. Occasionally, he and a friend, Mike Cahill, will board a plane for a blitz somewhere else in the world. Mexico is one of their favorites, since it is close and generally very open to the gospel. There the take rate is almost 100%.

When they crave high adventure, they will get the okay from the Holy Spirit to invade more hostile territory such as Israel or even a Muslim country. Their technique there is low key, plant as much seed as possible and get out leaving the Lord to "give the increase."

They have recently found a new, fertile field: local schools. Again their approach is both bold and friendly. Carefully avoiding intruding on actual school grounds, they stay on the public sidewalk as the kids come streaming out to go home. They do not ask anyone`s permission ahead of time, but arrive early and first share a tract and a smile with the parents waiting in their cars to pick up the kids. This defuses some of the concern the parents might have when they approach the kids.

If there are any security or police in the area, they will approach them with a respectful smile, thank them for their service to the community, and offer them a copy of the tracts they will be handing out. He said that wearing the Chick T-shirt, Please Don`t Go To Hell... really helped get attention at the schools.

Tim and Mike are sold on the value of just seeding the tracts out. He avoids long conversations with sinners, preferring to sow 300 tracts than spend an hour in often fruitless debate. Tim agrees with John Wesley: "The easiest way to approach a sinner is with a gospel tract."