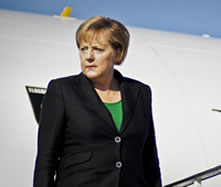 "Christianity is the most persecuted religion in the world." To anyone moderately aware of world events, this passing comment by German Chancellor, Angela Merkel, is an obvious fact. However, it created a stir in her country and beyond by groups with anti-biblical agendas.

Several "human rights" organizations from the German Green Party to Amnesty International, to the United Nations Human Rights Council`s Special Rapporteur on Freedom of Religious Belief declared her statement to be either "totally senseless," or "misguided." They said her opinion was based on "occasionally rumored numbers."

The highly respected Christian international aid society, Open Doors, jumped into the fray, countering that 80% of the religiously persecuted individuals worldwide were Christian, totaling some 100 million people in all. Open Doors` list of 50 most religiously repressive regimes fall primarily in two categories: Muslim or "Marxist-legacy."

Documentation of Islam`s campaign against Christians is extensive. Starting with "moderate" Saudi Arabia`s refusal to allow any church buildings to violent murder, rape and church torching in Nigeria, and the hundreds of thousands who have fled for their lives from Iraq, Afghanistan, Iran, Sudan, Syria and most recently, Egypt. Whenever Islam gains the upper hand, Christians are in jeopardy.

The other category, Marxist legacy countries, are less visible. Russia and some of the other former Soviet block states are turning increasingly unfriendly to Bible believers. Foreign missions work is being squeezed by new laws requiring government registration of all churches. In some cases, only the older movements with at least 15 years existence are approved.

China, along with North Korea, is, of course, the most repressive in this category. But even so-called Western World countries in Europe that have bought into socialism, a daughter of Marxism, tend to dampen freedom for Christians. For example, parents who wish to home school their children have had to move to America or face jail time.

Even more subtle are the pervasive lies of evolution and humanism and general scorning of Jesus and the Bible. Although not physical, this violence to the world view of young people has produced a spiritually lost generation in Europe.

Now, in America, this creeping secularism has succeeded in eliminating almost all Christian influence in our schools, universities, media and social conversation. The sins of abortion and sodomy have now been made legal and any Christian who dares stand for righteousness is persecuted to the limit of the protections of the constitution and sometimes, beyond.

So far, persecution here is primarily pressure to remove manger scenes and crosses from public property, fines levied against Bed-and-Breakfasts, wedding cake bakers, wedding chapels, etc. for refusing to accommodate same-sex ceremonies, However, one incident in Michigan followed the classic Muslim response by mounting a riot against street evangelists. The local "peace officers" ended up forcing the Christians to leave the scene rather than deal with the illegal mob.

Once sin is encouraged in a culture, violence against Christians is usually not far behind. The more the U.S. government moves toward the "Marxist legacy," the more dangerous it will become for Bible believers. Today, the emerging socialism is but a stepping stone toward one world government. Bible prophecy is clear that when that comes, it will be very dangerous to be a Christian. Years ago, Jack Chick could see how this was developing and wrote a tract called The Last Generation. Over the years, other titles replaced it, but he feels that now is the time to release it again. The surprise ending reminds us of the "blessed hope" that awaits those who are found diligently preaching the Kingdom when Jesus returns.

Other Articles from January/February 2013: