Let's Take the Gospel Where the Crowds Are 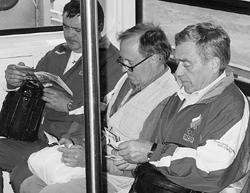 Snapshots from the Summer Olympics in Sidney, Australia show how Chick tracts grab the attention of both young and old. Witnessing teams distributed over 300,000 tracts in nearly 100 languages to athletes and spectators attending the games.

Some soul winning teams traveled half way around the world to take advantage of the rare event when so many people from so many countries would be in one place at one time. They were up at dawn to mingle with the crowds throughout the city.

One of the outreach leaders, Tom Gaudet, reported that they were able to give out tracts in 40 different languages in just one afternoon. Months of planning went into making the outreach a success.

Response cards were given out with the tracts for follow-up. Hundreds are still responding and have received correspondence courses and directions to churches in their countries.

One coach from Africa completed the correspondence course and then wrote to ask if there was a church in his country that taught what was in the course and if not, would someone please come and start one.

As you can see from the pictures, people are the same all over the world. They all like to read fascinating literature and many will respond to the gospel in it. The Olympic outreaches involve a huge investment, months of complex planning and prayer and years of follow-up afterwards. But hundreds of thousands are reached with the gospel in just a few days.

The same kind of outreach can be done even in small communities. Every town has events where crowds gather for one reason or another. With a bit of planning, any church can turn the event into an outreach. Gospel tracts are the most convenient way to get the message to the most people in the shortest time.

As you can see from the pictures, Chick tracts get read. That little girl with the sucker and the old man on the bench may be reading the good news for the first time —and they could just as well be someone who lives in your neighborhood.

Challenge your church to field the soul winning teams to hand out the tracts and prepare follow-up courses and visits to those who respond.

As Americans become more and more confused by false teachings and voices calling them to sinful pleasure, bold Christians need to blitz them with the gospel. What better way than saturate a crowd with good gospel literature.

Other Articles from March/April 2001: