Reports coming in from around the globe.

Walter Sayers —Guatemala
"Tracts read on the spot. Big impact. We went handing out many tracts and sharing the Good News with the locals. All who received them read the tracts and some even laughing as they read. God is so amazing! Thank you so much for helping us in our ministry here. The Pastors we work with in Zone 6 are having to go to 2 services next month because of the evangelizing and the tracts!" 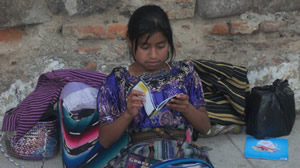 Daniel LaVita - Honduras
"The tracts that we received were a blessing more than we could have imagined, Praise the Lord, we saw many people saved and look forward to hearing later how the Lord used them. We have used them in the surrounding areas of La Ceiba and Piedras Amarillas. The People loved them and we would be blessed if you had more that we could give out. They go like hotcakes. People know right away that they are not filled with the false doctrines of the J.W.`s. Almost no one has ever said they do not want one, including the J.W`s.

India
Another 200,000 tracts are being printed in India. As of this printing, 70,000 have been completed in Malayalam for three different ministries spread across all of India. (In six years, India will have a higher population than China.) 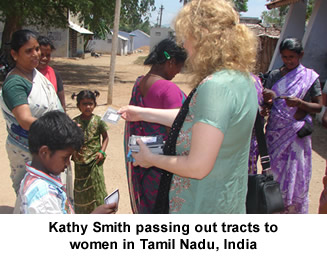 Robert Taylor — Mexico
"Our mission teams go out 2x2. One of the team members has a bag with 1,000 Chick tracts in it. The other team member has a bag with 1,000 of the book of Romans. They work as a team: one gives the person the illustrated book of Romans, and the other one gives the same person an ESTA FUE TU VIDA! I have been doing this for 41 years and this combination is the most powerful evangelizing tool that I have ever used."

Timmy Oakes - Mexico
"We have used other tracts when we run out of Chicks, but we prefer Chick. We have found they are more apt to read Chick tracts."

Terry Thrun - Samoa
"The youth passed out about 600 last week just before our youth rally. We had a lot of visitors come. 13 were saved."

Anthony Reitberg — Thailand
"Those tracts are a tremendous blessing. 5000 went to our outreach team in Bangkok, and the rest we just received by delivery in Kampaengphet. As you know, we do not give out tracts as one would distribute KFC flyers, but by laboring in prayer for souls first, and then only during the preaching of the Gospel with a preacher at point. The tracts are received by those that witness the preaching of the Gospel.

One Thai man picked up a Chick tract out of a rubbish bin in a local park in Bangkok and read it. He was so convicted he contacted us wanting to know more. He ended up coming to church, getting baptized and born again! By the way, when I was a teenager, it was Chick tracts that put the fear of God in my heart." 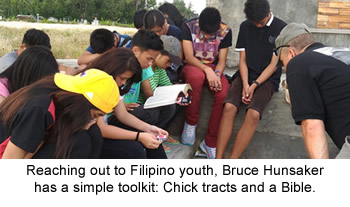 Although we are not legally structured to give tax-deductible receipts, we definitely know how to get literature into missionaries' hands. If you would like to help extend the hands of a missionary, please call us or send your donation to:


100% of the funds you send to the Chick Mission Fund are used to ship literature to missionaries.
We receive requests frequently from missionaries who need your help. Just during recent months, shipments have been provided for: