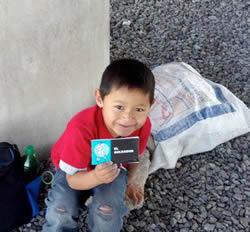 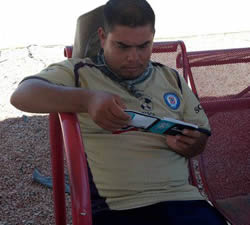 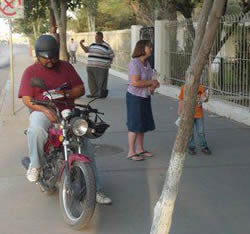 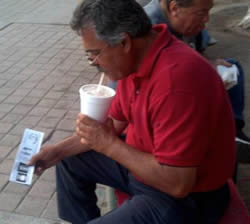 Missionary Tim Urling reports steady progress in church planting and literature distribution in strife-torn Juarez, Mexico. Last year, he and a team from Bearing Precious Seed salted the city with hundreds of thousands of tracts, Bible portions and other literature. New churches were planted and existing ones strengthened as a result.

This year, they did another major outreach with literature saturation. The outreach was capped with 9 open air meetings with hundreds making professions of faith. These were directed to local churches where many showed up on Sunday.

The pictures tell clearly how the Chick tracts grabbed the attention of the people. The picture on top is of one brand-new church that opened after the outreach in Juarez. (See http://www.respuestasjuarez.com.)

This is just one of many successful mission outreaches where Chick tracts are used to alert the community to the gospel. Follow-up by open air meetings and in local churches makes for a major impact on cities like Juarez all over the world.

Where Americans seem hardened to the gospel, so many of these hurting third-world countries are wide open to such outreaches. Over the years, missionaries working with over 100 major language groups have asked for Chick tracts in their language. Results have been dramatic in quickly getting the gospel to a large number of people.

In high population areas, thousands of tracts can be given away in just a few hours. One missionary in Africa reported that he was so mobbed that he just threw the loose tracts into the air over a crowd of people and scooted away to safety.

In Chiapas, Mexico, Missionary Tom Sloan reports another success of literature saturation in laying the groundwork for a permanent church. He took a team of soul winners over a treacherous mountain road to a village they had never reached before.

After a few days of tract distribution, the mayor agreed to let them hold meetings in the town square. Enough people attended the first meeting to start a permanent work there.

Besides Chiapas and Juarez, the Chick Mission Fund has been able to help extend the reach of missionaries in countries all over the globe.

If you would like to help missionaries that your church has sent to the field, suggest that they view what languages are available and pick out tracts that they would like to use. We will drop-ship to them as many as you are able to purchase. If you cannot find a missionary, we receive requests frequently that we can help you fill.

Other Articles from May/June 2012: