Missionaries Use Saturation Blitzes to 'Seed' a City 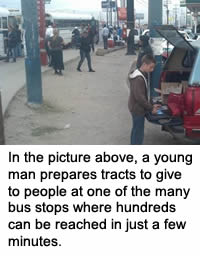 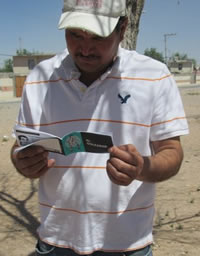 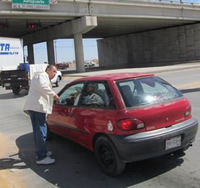 How do you reach a city of 2 million+ with the gospel? After several years of groundwork in Juarez, Mexico, Missionary Tim Urling is on a roll. His strategy: massive literature saturation, followed by evening open air meetings and solid local churches for the converts. Twice a year, Urling invites interested Christians from the states to come south of the border for half a week of intense outreach. The local believers and churches in Juarez team with the Americans to carry out these exciting campaigns.

Armed with a truck load of Chick tracts, teams invade the city center handing out as many as 10,000 tracts an hour in some places. Busy intersections are a favorite location where waiting drivers and passengers are handed a "paper missionary." Urling`s strategy really got rolling last November when a handful of Americans came to Juarez and helped members of local churches distribute more than 70,000 tracts in just two days. In open air meetings held on two different nights, those who made professions of faith were directed to local churches for follow up.

Urling says that the main object of that blitz was to sow seed for future harvest. "We have observed a marked decrease in violence in the entire city in the weeks following these campaigns. Our soul-winning efforts become more effective as we can ask 'Did you get one of these yet?` (A Chick tract). Either way, it is a great door opener."

Urling is training local believers as pastors and looking to neighboring communities where they can plant the next churches. One Mexican pastor commented, "This time the Americans helped us! It wasn`t us helping the Americans."

Urling sees this as the vision taking hold in the hearts of the local Christians so they will continue using these methods to sow the seed in their city! Urling also has an evangelistic website printed on the back of each tract. On the website they can read more Chick tracts as well as watch evangelistic videos and even enroll in Bible study courses. Urling believes that we should use all means possible to get the gospel message out.

Missionaries around the world are reporting back to Chick Publications the effectiveness of this strategy. Solid fellowships are being established as the result of first saturating the communities with gospel "seed."

For 2014, Urling plans two blitzes, in June and November. His goal is 100,000 Chick tracts in each, with open air meetings each night. Urling is appealing to the churches who support his ministry for funds for the tracts. In the past, the Chick Missions Fund has contributed to make his goal and plans to do so this year if he is not able to raise full funding.

If you wish to help Urling directly or join him for one of these outreaches, you may contact him through his website: www.2EveryCreature.com

This is just one example of projects that the Chick customers support for missionaries around the world. If you would like to help Urling or any other missionary, please see page 11 for more information about the Chick Missions Fund.