We have been working in India for a number of years. We have a working relationship with some brethren there who are very familiar with local ministries, and who help us choose the best places to put the literature. They also arrange for printing there in India, and arrange delivery. We depend upon them for the necessary accountability.

Here are the main ministries who received tracts in India through the Missions Fund: 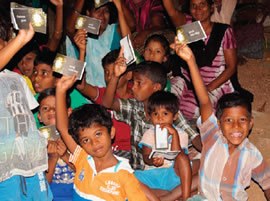 Excel VBS Ministries — 80,000 tracts — They conduct VBS programs in India in which they reach tens of thousands of children across India. They then send those children home with a Chick tract to show the Gospel message they learned to the rest of their family.

Gilgal Ministries — 200,000 tracts in English, Hindi, Bengali, Tamil, Malayalam, Kannada and Telugu - Gilgal Ministries has an interesting approach. Under the new Hindu leader, India is becoming more hostile to Christians in some areas. Gilgal provides teams who camp near a local church for 3-5 days and saturate the community with tracts. They visit every home and when they find someone interested in the gospel, they pass the lead back to the local pastor. Then they are on the next church before the authorities catch on.

ICII — Independent Church of India — 210,000 tracts in Tamil, Telugu, Kannada and Punjabi — They spread the tracts throughout the churches in their group, who use them for local evangelism and have actually started new churches with them.

Timothy Institute — 100,000 tracts in English, Hindi, Gujarati, Malayalam and Marathi — Once again, I will let our agent there describe what they do: "Timothy does work mainly on the lines of VBS and reach out to kids in North India in a very big way. They are also as big as Excel Ministries and conduct 1000+ VBS`s every year. Over 90% of the kids they reach out to are from Hindu and Muslim backgrounds. They also have teamed up with Indian Evangelical Team (IET) that has over 5000 churches in North India.

This year our printers are in the process of printing more than 400,000 tracts for various ministries. The printing is a big job, and is not yet complete, but we hope to have it done by spring. Here are the projects for this year:

El Shaddai Gospel Ministries — 210,000 tracts in Hindi, Tamil, Kannada, Bengali, Telugu and English - They are a rural church support ministry which takes up the assignment of personal evangelism for churches.

On invitation, they go and settle near suburban or rural churches and go two by two as evangelists to houses and villages nearby. Most of the suburban towns have several villages around them. They evangelize for the church and invite interested people in the neighborhood to the church that invited them. They are a well organized team of people working from northern regions of India all the way down to south. Since their work is spread throughout India, they have a much wider coverage of languages than any other ministry.

Intercollegiate Prayer Fellowship — 75,000+ tracts in Hindi and English - Their work is centered around Prisons of Delhi and Noida and also Tihar jail, one of the largest prisons in India.

Sharon Roja Ministries — 45,000 tracts in Tamil - They conduct a pastors meeting every month where they teach Bible and give free tracts for pastors. They are now starting a pastor`s meeting in Salem district also. They work with nearly 300 pastors and need lots of tracts (20,000 tracts/month) in Tamil. This is an established ministry working in Dharmapuri for over 15 years. Dharmapuri is one of the most rural and under developed districts of Tamilnadu.

Here you can see the size and scope of the Chick Mission Fund projects being carried out in India, alone.

Other Articles from May/June 2016: