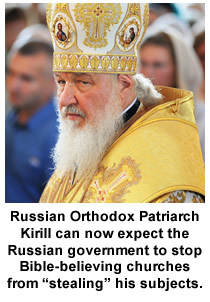 A new restriction on religious activity, supposedly to curtail terrorism, has Russian Bible believers deeply concerned. On July 3, President Putin signed a law that, when enforced, will require prior authorization from the state for even sharing the gospel during a conversation.

Barnabasfund.org reports that: "Even in a private home, worship and prayer will only be allowed if there are no unbelievers present." Violation of this would draw a $770 fine, and if the person belongs to an organization such as a church, it could also be fined $15,500.

Churches are limited in contact with foreigners. Non-Russian citizens would be required to have a work visa to attend a church service or be fined and expelled from the country.

Originally billed as anti-terrorism legislation, there appears to be no exemption for churches, except, possibly, the Russian Orthodox. Objections were raised before the bill passed and slight amendments were made. But critics claim these only tilted the favor toward the Orthodox to the exclusion of other groups. This drastically reverts the attitude of the government back to the severe oppression of the Stalinist regime.

Missionary activity in Russia has always been difficult because Russian identity and the Russian Orthodox church have been so intertwined. As with countries where Roman Catholicism dominates, the civil government is never free from the dictates of the "church."

Protestant leaders are hoping that, when it comes to enforcement, they will be cut some slack. But there will be a chilling effect on witnessing, nevertheless. This will provide enemies of the gospel with a weapon to use if they wish.

This is an extreme case of a drift away from religious freedom that is happening throughout Europe. Britain is debating a law to tackle Islamic radicalization and counter the terrorism threat. The center of the debate is about the definition of "extremism." Wishing not to offend "moderate" Muslims, they are trying to make the law so general that other groups that pose no threat are worried.

This illustrates a very basic quandary on the Western World. We have valued freedom so highly that we have thrown away reasonable constraints. The individual person has been given such freedom "rights" that even sins like abortion and same-sex marriage are accepted.

What is done in the bedroom by consenting adults is deemed to be no business of the government, and therefore society. The same goes for pregnancy. Government, society, or even parents, should have no say over what a woman does with her body, even if she is a minor.

Humanism has taught us this kind of "liberty" (license). But along comes a religion, Islam, which has taken advantage of this freedom to promote world conquest with death to anyone who opposes it. Suddenly anyone who pushes his belief on others is taking an "extreme" position and must be stopped.

This general law is proposed to give the government power to monitor any organization that may be fomenting some extreme position, such as jihad —or soul winning. If same sex marriage is the norm, then it is "extreme" to speak against it, even just by quoting God`s opinion on it, the Bible.

It remains to be seen how far the rest of Europe, and even America, will follow Russia on this. Where the political power of the Russian Orthodox "Church" has drawn a severe line against soul winning, Europe`s religion of humanism may also use this opportunity to squelch the gospel.

As we have seen in America, Islam, humanism, and the sodomites have made much progress using the levers of political power to eliminate God and the Bible from our schools and the public square.

Soul winners, we need to get busy while it is so safe and convenient. Clouds of persecution are gathering.