Adventures of Tim B. 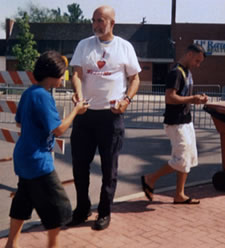 Recently, on my way to the Dearborn, Michigan, Arab-American Festival, where the Lord allowed us to hand out 4,000 copies of Unforgiven, I was waiting for a friend driving from Wisconsin who was going to pick me up in his truck at Chicago`s Midway airport and take me to the festival.

He was running late so I started handing out some tracts to folks waiting, cab drivers, etc. I saw that this bus had pulled up. I walked over to it and the driver opened the door. I held up one of the tracts I had. The driver looked at the tract and tears welled up in her eyes. I asked what was wrong and she said, "Years ago I used to order Chick tracts by the hundreds, but then I got away from the Lord and stopped doing it. Recently the Lord has been dealing with me and today I met you." I gave her 10 different Chick tracts and she drove away crying.

Recently, I was at my bank and as always, I take English and Spanish tracts with me. I had given out all the English tracts except one and I had a few Spanish tracts left. I felt impressed to give my last English tract to the bank greeter, but I didn`t want to offend her by giving her a tract that said Stinky on it. So I walked up to her and said, "Ma`am, do you have any children at home?"
She replied, "Yes, I have a daughter,"

I handed her the tract and said, "Would you please give this to her?"
She started laughing and I asked, "What`s so funny?"
She said, "My parents call her by that name!"

God is so creative!

Other Articles from March/April 2013: