Chick Tracts Are Extending the Reach of Missionaries Worldwide

Thank you to all who have sacrificed to give financially to the Chick Missions Fund! You have helped provide millions of tracts to missionaries all over the world. Together, we are making a difference.

Robert Taylor — Mexico
We began our yearly Christmas outreach to the city of Guaymas, and the many surrounding villages yesterday. We took 2 thousand Chick tracts with us. It was incredible what we experienced. There was very easily 20 thousand people on the streets doing their Christmas shopping. Buses were rolling in one after another bringing people in from dozens of villages within a 20 or 30 mile radius.

We passed out those 2 thousand Chick tracts in less than an hour. We were passing them out as fast as we could hand them out. It was incredible. Every Christian in America needs to experience something like that. And the good thing about that is the fact that the tracts were going back to dozens of outlaying villages, some of them very remote, as well as to many people in the remote places of the city of Guaymas itself that we would not normally be able to reach very easily.

We plan on going back on the streets in Guaymas tomorrow morning with the other 8 thousand Chick tracts that we have left. We won`t get another opportunity like this for a year.

Our mission here doubled its effectiveness when Chick tracts became available to us in the volume that we are now getting them.

Donnie Whitlock
Whitlock works with many pastors from the Philippines and the Golden Triangle. One pastor writes: "God has been good to me and my wife....the work of the Lord has been blessed with 462 Professions of Faith in all our Services including Chapel and Church Services since November and this December. There were also over 2000 professions of faith that have signed up in our Attendance Sheets for our PTA HOMES Ministries. Our Work in the Public School was also blessed by our Lord with over 1500 Pupils from Grades 4-6 with 9 Sections each Grade. This is once a week scheduled Bible Program which we called "Values." All these Ministries received Chick tracts. We praise the Lord the School Superintendent and the Principal allowed us to teach Bible Truth which are not allowed in many parts of the country because of persecutions and discrimination."

David Robinson — Malawi
We need to realize that each tract that goes out creates a story of its own. Here is an example.

Robinson says that in Malawi, anyone with some sort of disability is shunned by the community. This was happening to a young man who was deaf from an infection when a child. Willy had resorted to lip reading in school but could not keep up with the class.

He dropped out but continued to read anything he could find. He attended church but found little help because of the cultural stigma. He did, however, began devouring the Bible. After reading it through several times, he started a Bible study for the deaf.

One day he was given a little booklet, UNU UNALI MOYO WAKO, the Chichewa version of This Was Your Life. Willy immediately recognized how he could use it to teach the gospel to his deaf group, many of whom could not read. Fortunately, Robinson`s church had stamped the back of the tract and Willy spent precious money for a bus ticket and showed up at their door. After telling his story, all he wanted was more tracts with pictures that he could use to teach his group. 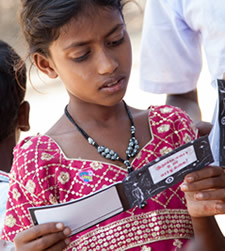 The Mission Fund is in the midst of printing and delivering over 400,000 tracts to 5 ministries in India, several of whom work especially with children.

100% of the funds you send to the Chick Mission Fund are used to ship literature to missionaries.
In the past few months, shipments have been provided for:
Brazil       Bulgaria      Canada      China      Costa Rica       Ethiopia

Other Articles from January/February 2016: