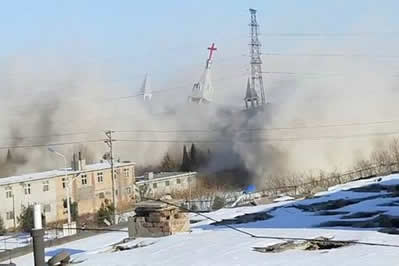 "Religious freedom in China has really reached to the worst level that has not been seen since the beginning of the Cultural Revolution by Chairman Mao [Zedong] in the 1960s," says Bob Fu, a former house church pastor in China. Fu came to the U.S. to found China Aid to warn of the growing persecution in China.

The picture that is shaping up is a highly controlled society with a personality cult. The control follows the pattern of other Marxist/Socialist/Communist countries, present and past.

President Xi Jinping is the personality behind the cult. In the last 10 years, he has systemically restructured the government to put himself in permanent charge.

Control is escalating by using modern technology. Cameras are installed in churches to record who attends. It is now a crime not to watch state television.

As in Russia, the excuse for the crackdown is to "eliminate extremism." Detention camps have recently been constructed holding up to a million Uyghur Muslims in the western province of Xinjiang. Since the Christians, especially members of the unregistered "house" churches, are also considered "extremists" by the communist government, they are included in the government "elimination" efforts.

Churches are now being forced to hang pictures of Xi beside crucifixes and sing communist anthems during service. In some places, children under 18 are forbidden to attend church and Bible camps are being closed. Bibles and other "illegal promotional materials" are being confiscated and burned.

Authorities in some provinces are taking a harder line than others but the government has passed regulations directing the nation-wide shift toward less freedom. The emphasis is on forcing everyone to submit to the Communist Party and "Chinese" culture. And all rivals must be eliminated, including Christians. "Party members who have religious belief should have [be given] strengthened thought education," according to new government regulations released in February.

Some brave pastors have tried to resist. The persecution has become worse since new government regulations were published. At least 250 Chinese pastors have signed a public statement against the regulations. It closed with: "For the sake of the gospel, we are prepared to bear all losses, —even the loss of our freedom and our lives."

This stand could be costly. Witness the invasion of one church in Henan province: 50 officials stormed the service, beat the worshippers and confiscated most of the church property. One grabbed the microphone from the pastor, read a document declaring the church "illegitimate" and demanded the pastor sign it. He refused and was taken away.

Some of the women attempted to video the attack and were beaten and kicked and their cell phones confiscated before they were taken into custody. Anyone who attempted to protect them was also beaten.

"For the first time, people throughout China are saying 'NO!' to what the Communist party wants—control. Control over what they can do, what they can believe, where they can go, what they can say. It's yet another sign something is beginning to take shape here in China, the call for democracy! The call for freedom!" says Christopher Gregory of China Missions.

Decades ago the people of China chose Communism's hollow dream instead of the Bible. Now, millions there have discovered the truth and are willing to die for it —and some may have to.

The same war is being fought in almost every other country in the world. Satan's time is short and he is outraged. America is an oasis in this battlefield, but for how long? Handing out a gospel tract can get you killed in some parts of the world.

Many have shed their blood to buy and protect our freedom. Are we grateful enough to exercise that freedom and just hand someone a tract?