Reports continue to come in from missionaries using Chick tracts to start and strengthen churches.

Robert Taylor - Mexico
"This is the beginning of the church plant in Pueblo Yaqui, Mexico. It is a difficult work, but our liberal use of Chick tracts made our work much easier. I would recommend any missionary, wherever in the world they are, to use Chick tracts in the ground breaking phase of their church plant if they want to make their job much easier, and effective. Chick Tracts used in the right combination are a powerful evangelizing tool. Our favorite combination is This Was Your Life and One Way, in Spanish. Chick tracts have a powerful gospel message in an easy-to-read format that people of low reading skills can understand."

Jerry Alford — Venezuela
Even under a severe political and economic climate, Chick tracts are still being used to start new congregations and strengthen others. In one city, the government has temporarily detained church leaders and confiscated their building. The socialist government has created major food and medicine shortages.
"Danger is out of control in the streets," he writes. On December 6, a new election was held that promises to change things for the better. Reports are guarded, but much prayer needed.

Walter Sayers — Guatemala
"Guatemala and I say thank you so much for investing in us here and just wanted to let you know that we are seeing many salvations and almost all tracts are read on the spot with a lot of enthusiasm."

Rodelio Mallari — Philippines
"Since July, we have all in all personally distributed and locally shipped a total of 20,000 Filipino Chick tracts entitled: Nasaan Ang Iyong Pangalan (Where is Your Name) and Ang Sukdulang Paghamak (The Greatest Insult) —of which 4,000 copies were reserved and passed out during the creepy 3-day Catholic celebrations of Halloween, All Saints Day and All Souls Day (October 31-November 2).  For the most part, the tracts were distributed nationwide by our co-workers` personal witness, from house to house, street work, mail boxes, bus terminals, shopping malls, schools, police stations, prisons, military camps, etc.  We thank the Lord for Chick Publications` Missions Fund which so generously supplied the free 20,000 comic tracts and paid for their shipping costs from the States to the Philippines."

India
For years, Chick Publications has worked with Indian partners to print tracts there in the country.  Five years since the start, already one million tracts have flowed from local printing presses to ministries all over India.  Pictured below are smiling faces enjoying the gospel in the Bengali language. 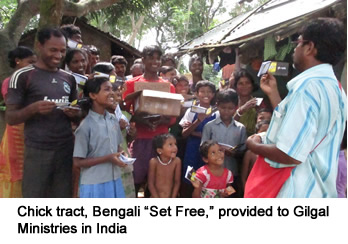 100% of the funds you send to the Chick Mission Fund are used to ship literature to missionaries.
In the past few months, shipments have been provided for:
Argentina       Zambia      France      Peru      Philippines       Israel

Other Articles from January/February 2016: