Confusion Growing over Tolerance of Homosexuals 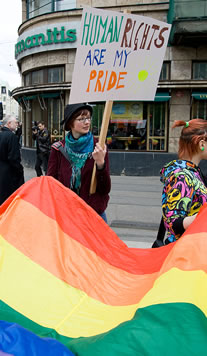 The signing of the Don't-Ask-Don't-Tell repeal by President Obama is yet another advance to the mass confusion caused by the sodomite "abomination." It is a victory for homosexual activists, but military officials plan to use caution in implementing it.

Foot soldiers wonder how they will feel when ogled in the common showers and chaplains fear restrictions on preaching from certain scriptures where God expresses His opinion on the subject.

We are just beginning to see some of the early consequences of legalizing this sin. David Epstein, a Columbia University professor arrested for felony incest with his consenting 24-year-old daughter, is pointing to the 2003 Supreme Court decision striking down sodomy laws.

The court found that the government cannot prohibit "private, consensual, sexual or intimate conduct that does not involve minors or coercion." Epstein argues that this makes incest legal between any consenting adults.

In Maine, a middle school is being charged with discrimination against a sixth-grade child who is a boy, biologically, but has chosen the "gender identity" of a girl. Instead of allowing him/her access to the girls' bathroom and showers as she/he requested, they provided personal separate facilities and sensitivity training for the staff and other students.

The parents sued because this arrangement "isolated and alienated" her/him from other students. They then moved the child to another school to escape the "hostile environment."

Another front of attack by the sodomite lobby is called ENDA, the Employment Non-Discrimination Act. If  passed by the legislature it would add "sexual orientation" and "gender identity" to the list of protected categories that an employer cannot consider when hiring, firing or promoting someone. The bill supposedly contains a "church exemption," thus not forcing churches to hire someone who does not hold the church's biblical values. But what about Christian publishers, gospel bookstores, missions organizations, etc.?

If  ENDA passes into law, it would be administered by the Equal Opportunity Employment Commission. President Obama's nominee to sit on the EOEC is Chai Feldblum, an open lesbian and Georgetown law professor. When asked about employers considering religious beliefs when hiring, she replied, "Gays win; Christians lose!"

Another goal of the homosexual lobby is the repeal of the Defense of Marriage Act (DOMA). This law, enacted in the mid 1990s, states that marriage must only be between a man and a woman. This is the main block against legal acceptance of same-sex marriage nationwide. If it falls, all states will have to honor such marriages performed in other states.

As mentioned in a previous Battle Cry about the judge's ruling against the Christian Legal Society at Hastings Law School, other universities are pressuring Christian clubs on campus to stop "discriminating" against homosexuals by refusing to allow them to be leaders in their clubs.  Also, other states are following California's lead in mandating the teaching that same-sex marriage is just an alternate life style.

Until the last quarter century, our laws agreed with the Bible that sodomy was a "preferred" behavior that people chose to do. Now, they have succeeded in selling the lie that they were born with a same-sex "orientation." This makes them eligible for special "civil rights," just like people who were born black. Using the anti-discrimination laws, they are claiming all kinds of benefits and protections for their sinful lifestyle.

Chick Publications has tried to warn against this abomination with tracts and books exposing these lies and stressing God's viewpoint. Our newest tract, Uninvited, shows how Satan uses his devils to seduce people into this sinful lifestyle. But Jesus has power even over this demonic spirit.

Another Chick publication, Hot Topics, deals with homosexuality and pornography, among other politically incorrect subjects.

Other Articles from January/February 2011: