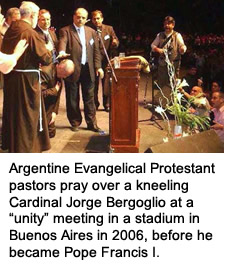 The new pope Francis has only been in office for about a year, but has laid much groundwork for the prophesied one-world religion.

He has the Anglican Archbishop eating out of his hand, made nice with the Orthodox Metropolitan, assured Muslims that Allah and Jehovah are one and the same, pledged a continued romance with the Jews, and persuaded some evangelical Protestants to agree that "Luther`s protest is over!"

In a recent mutual admiration conference, Anglican Archbishop Justin Welby gushed: "I pray that the nearness of our two inaugurations may serve the reconciliation of the world and the Church." Both men were installed about the same time.

For centuries England stood firm on God`s preserved words in English, the King James Bible, and successfully fought off the Vatican attack dogs. During that time, British missionaries spread the true gospel deep into the heart of pagan lands. Her navy policed the seas and "the sun never set on the British empire." How far she has fallen to this groveling at the feet of the enemy, all for the sake of "unity."

As for the Eastern and Russian Orthodox, little differs between Rome and Constantinople. Both rely on unbiblical traditions that basically "make the commandments of God of none effect." The main argument is over whether the pope has the right to be boss. "Unity" for them will require resolving two conflicting power trips.

As for Muslims, popes have long held that they both worship the same god. And there is little argument here since neither one of their gods resembles the God of the Bible. But his pledge for "unity" has so blinded Pope Francis that, speaking of Muslims, he declared: "We must never forget that they 'profess to hold the faith of Abraham, and together with us they adore the one, merciful God, who will judge humanity on the last day.`"

Apparently his interpretation of the Qur`an is as loose as his reading of the Bible. To be pope, he has to ignore large blocks of the Bible. And to make such a ludicrous interpretation of the Qur`an requires equally large blind spots. He must also brush off the millions of "Christians" who have been murdered, or had to migrate out of extreme persecution in Muslim dominated lands.

Pope Francis has also held numerous meetings with "representatives of other faiths." In their attendance he claimed to see "a tangible sign of the will to grow in mutual esteem and cooperation for the common good of humanity."

In a recent Apostolic Exhortation, Evangelii Gaudium, Pope Francis even resurrected an obscure teaching of Roman Catholicism to crack open the back door for everyone: "Non-Christians, by God`s gracious initiative, when they are faithful to their own consciences, can live 'justified by the grace of God,` and thus be 'associated to the paschal mystery of Jesus Christ.`"

But the Bible is clear that those who rebel against Christ`s free gift of salvation will have no part in His kingdom. And, Rome`s Magisterium clearly states that there is no salvation outside the "church." Neither the Bible nor even Catholic tradition need stand in the way of this "unity."

When Jesus prayed for unity it was not for the believers to be one with the world, but that they would "be one" with each other. The pope`s promotion of another gospel disqualifies him to be included in Christ`s prayer.

It certainly does not include Muslims and other unbiblical "religious traditions." In fact, the Apostle Paul was emphatic: "Be ye not unequally yoked together with unbelievers," (2 Cor. 6:14).