Is Mother Theresa Really a Saint? 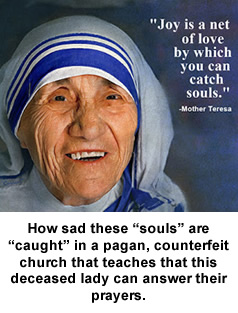 In a huge celebration in Rome in September, Pope Francis declared Mother Teresa a "saint." Considered one of the "most recognizable faces of the 20th century," the tiny nun won a Nobel peace prize for a network of homes for the sick and dying around the world. She became a world symbol of goodness and charity.

But the process of elevating her to "sainthood" some 15 years after her death exposes another Roman Catholic deviation from scripture. To the pope, sainthood is not conferred when someone is born again. Actually, the Vatican does not teach salvation as an event, but a process of lifetime events, called sacraments, necessary to possible salvation, though one can never be sure he is safely saved.

In the Bible, saints are ordinary Christians. They are not "holier" people who died, were prayed to, and answered prayers with miracles. (Note: The term appears over 60 times in the KJV. But it`s missing from the NIV, making it easier to redefine the term to fit Roman doctrine.)

Rome`s process of "making saints" is part of a whole system of pretending dead people can mediate for us besides Christ. That sets up a pantheon of semi-gods, including the Virgin Mary goddess. Theresa joins more than 10,000 "saints" put in place to intercede for all kinds of needs.

They say you can bury an image of one saint in your yard to help you sell your house. Another is the patron saint of sterile women. Still another can be invoked against thunderstorms. A list of saints at Wikipedia will help you pick one for your problem of the day.

But the Virgin Mary is Queen of these heavenly helpers, of course. It took several centuries to get her into position as a co-advocate with Jesus.

Not long after Christ`s resurrection, Justin Martyr and Irenaeus wrote of her being included in the salvation process. At the Council of Ephesus in 431, the Virgin Mary was installed as the Mother of God. In 553, she was declared a perpetual virgin. But the Bible clearly states she birthed at least 6 children.

In 1854, Pope Pius IX decided that she was born without sin (Immaculate Conception). Then in 1950, Pope Pius XII declared that she ascended bodily to heaven (Assumption of Mary).

Currently, some in Roman Catholic leadership are campaigning to designate this Virgin Mary goddess as Mediatrix or even Co-Redemptrix with Jesus in dispensing the grace of salvation.

Like all other false religions, Jesus is the target. They don`t officially deny that Jesus is God. But they essentially elbow Him aside in Roman Catholic rituals and worship. Some even teach that He is the severe Judge ready to whack you for your sin, while gentle, loving Mary will hear the cry of your heart and appease His wrath.

Many Roman Catholics are discouraged from reading the Bible and directed to petition one of the Mary goddesses or one of 10,000 "saints" for their needs. All over the world, statues and monuments are named "Our Lady of (you name it)." Google serves up over 240 million hits on this open-ended phrase. All of this is designed to redirect the attention and prayers of the "faithful" to Rome`s counterfeit mediators.

Paul made it clear to Timothy (1 Tim. 2:5) that: "...there is one God, and one mediator between God and men, the man Christ Jesus." Directing prayer to "saints" and the Virgin Mary goddess is just further proof that this is the prostitute "church" of Rev. 17 and 18.

For further information see page 55 of Answers to Your Bible Version Questions, by David W. Daniels.

Other Articles from November/December 2016: