India
We have now begun production of hundreds of thousands of tracts for two ministries we have been helping for several years: a very large hospital ministry, and the Independent Church of India. The hospital ministry has thousands of volunteers who find people especially receptive to the Gospel while in the hospital. The Independent Church of India (working with Missionary Kathy Smith) works the streets and visits homes in several parts of the country. They have started new churches using the tracts you provided.

Kenya
Joetta Smith wrote: "A new family came to church on Sunday. They are JWs and the father works a long way away in Eldoret, but the family lives here. The father got one of the Chick tracts and called them and told them to stop going to the JW and to come to our church! Praise God! My granddaughter called me all excited because at her ladies group at church they started talking about Chick tracts! She lives in Indiana.

"So many have come for tracts I can hardly believe it! Can’t wait for the last shipment to arrive! Surely we are seeing the hand of God. The street evangelist came to see me today as he is preaching from Chick tracts now and Pastor Sablon interpreted and we talked about three hours!

"Pastor Sablon and I will be going to speak at a meeting in Buchifi in February for two days. That is the area where so many have gotten saved. Then we have our own two-day meeting a week after that, so we know lots and lots of tracts are going out in February. God is on the move."

This makes clear that the tracts are having a real impact.

Mexico
Missionary Mike Wallace wrote: "Last two days alone, my family and I passed out more than four thousand tracts! Last night my family and I went through our town plaza giving tracts to as many as would take them. In about 1.5 hours we gave out about 2500 tracts!"

Samoa
Missionary Terry Thrun wrote: "Today we had a Samoan lady trust the Lord after reading a Chick tract. We got a call from her. She said she received one of our tracts. We went to her house today and she was saved."

Jewish Missions
A Chick Missions Fund donor gave enough to purchase 250,000 Chick tracts for work among the Jewish people. They are still being used today. Because of the constant threat of persecution, we are unable to provide much detail, except for this encouraging message from one of the workers: "I used a Chick tract (Love the Jewish People) to draw M___ into a conversation that ultimately led him to ask the Lord to save him! We were at a thrift store where he had just bought his daughter a bicycle. He told me a year earlier he had been an alcoholic and was living an alcohol-free life through self reformation. Through long deliberation with him, M___ saw his need for salvation."

Zambia
Missionary Mike Dobbins nearly ran out of tracts, until he discovered that more had arrived at the post office in Chingola. He reported that they led 18 people to Christ in 2 weeks! When given the tools, these missionaries know how to get to work! He is excited because a recent shipment of 10,000 "It’s Your Life" (black characters) just arrived in Zambia. The work goes on! 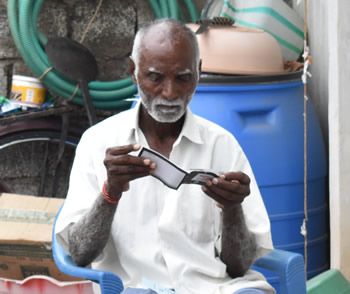 Other Articles from March/April 2018: