Petrified Forest in Antarctica More Evidence of the Flood 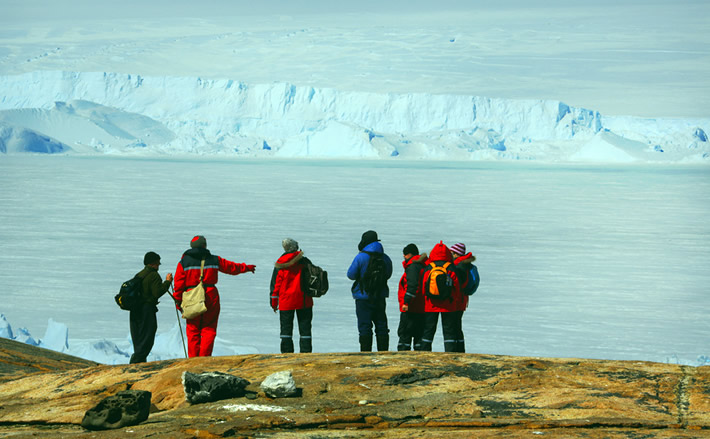 Explorers in Antarctica have discovered what they call the "oldest polar forest on record in the southern polar region." It is a fossilized mix of evergreens, deciduous, and Gingkoes, that appeared to have died suddenly.

Evolutionists are scrambling to find evidence of the huge time periods necessary for random mutation to create modern man from the primordial soup. In the process, they have created an immensely complex history of the planet described in sometimes unpronounceable terms.

There is one phenomenon they call the "great dying," a sudden cataclysm that they place hundreds of millions of years ago, which supposedly destroyed about 90 percent of the plants, animals and fish.

Theories of the cause range from asteroid impact or volcanic eruption, to "anoxia," (seawater depleted of oxygen.) —or all of the above. Articles trying to explain the theories use lots of words like "maybe," "may have," "might have been," and "could have."

Like the theory of evolution, itself, speculations and assumptions make up most of the support for their ideas.

The OneNewsNow article reporting the finding of the "forest," quotes both the evolutionist and creationist views.

Erik Gulbranson and a team from the University of Wisconsin-Milwaukee (UWM) made the discovery. He attempts to place the date of the trees some 250 million years ago, just prior to the event causing the "great extinction."

The article presents several other speculations about the cause of the sudden loss of so many species. A favorite one is that a large rock (asteroid) collided with earth and so disrupted the atmosphere that life was extinguished.

Another blames ash from volcanoes and still another says shifting tectonic plates may have been at fault.

Dr. Timothy Clarey, affiliated with the Institute for Creation Research, points out that they are ignoring evidence that the fossils are less than 10,000 years old. The stumps of the trees found in Antarctica contained amino acids which decompose in a few thousand years, and are not able to survive millions.

Rapid burying was also evident by the plant cells being virtually mummified, "preserved down to the cellular level," Clarey observed. Dinosaur bones were also discovered in the south polar area. They contained DNA that would not have survived beyond 10,000 years.

Dr. Clarey concludes: "So, the fossil trees themselves tell a different and a far more recent story —one that fits the biblical account of a global flood just thousands of years ago. These trees were buried rapidly during the global flood described in Genesis. Temperate and tropical plants and animals were caught up and quickly buried in the ash, mud, and sand that engulfed them in this cataclysmic event. These fossils remind us that God's Word is true."

Chick Publications has a classic tract, Big Daddy?, that has been used in schools and families for many years. It systematically refutes the basic arguments of evolutionists and demonstrates their only response —shrill intimidation.

As back-up for the tract, A Crusaders comic, Primal Man, sets the weaknesses of evolution in an engaging story, driving the truths home.

Two paperbacks, The Vanishing Proofs of Evolution and The Evolution Handbook provide extensive education for anyone serious about helping others see the diabolical deception of this "theory."

The Evolution Handbook is one of Chick Publications' greatest values. At nearly 1,000 pages of very readable text, charts, and pictures, it leaves no fossil unturned in destroying every possible argument of evolutionists.

Yet, modern technology increasingly demonstrates evolution's lie. Soul winners, we need to replace it with the Truth!

Other Articles from March/April 2018: