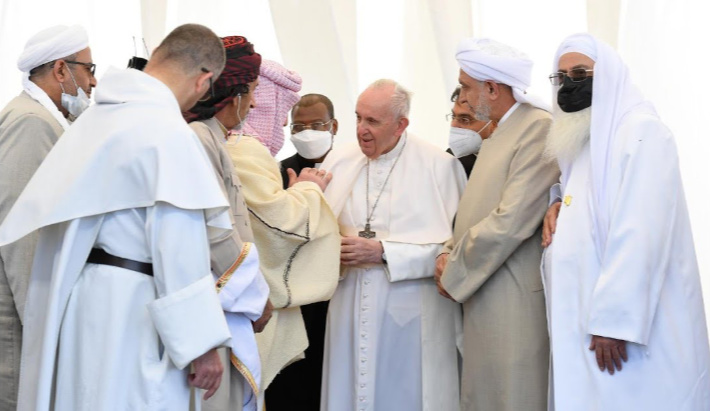 CAPTION: Interreligious meeting in Ur, Iraq during Pope Francis' Visit.
----------

With the COVID lockdowns receding, Pope Francis is back to building bridges. This time, it is with the Shiite Muslims. Early in March, Grand Ayatollah Ali al-Sistani welcomed the pope at his residence in Najaf, Iraq. Other stops included Baghdad’s presidential palace and a Catholic cathedral where terrorists massacred 48 people in 2010.

There was high symbolism in another event held at the ancient archaeological site of Ur. According to Genesis 11, Ur was Abraham’s hometown, whence he was called out by God to travel to Canaan. And since Islam, Judaism and Christianity all claim Abraham as a common spiritual father, this visit sent a strong message of unity.

Another girder in the pope’s bridge is the fact that both Islam and Catholicism claim to revere Jesus —Islam as a prophet and the pope as a wafer god.

Iraq is the 10th Muslim country that Pope Francis has visited in his tenure, and he has hosted several Vatican events with Muslim leaders.

There were gracious speeches all around:

"It is essential to ensure the participation of all political, social and religious groups and to guarantee the fundamental rights of all citizens. May no one be considered a second-class citizen," the pope admonished.

"Your insistence on visiting Iraq despite the difficulties of the pandemic, and the hard times witnessed by our country, doubles the value of the visit to Iraqis."

Both are well aware of the gulf between them. Before the U.S. invasion of Iraq, there were an estimated 1.4 million people who claimed allegiance to Christianity. Today, fewer than 250,000 remain. The country is now 98.5% Muslim.

Discrimination is intense. Muslim women are forbidden to marry non-Muslims. Conversion is prohibited to any other religion from Islam. Children must be registered as Muslim if they are from a mixed marriage.

How sad this charade is. The political head of a counterfeit “church” boldly claims to come in the Holy Name of our Lord to advance the worship of a wafer god and virgin goddess.

Fortunately, there are reports of underground believers in some of the Muslim countries. One missionary reported that the church in Iran was one of the fastest growing in the world, though Islam’s brutality drives them to silence, so it is hard to get real numbers.

Persistent soul winners have been looking for holes in their iron curtain where the gospel could be filtered in through the internet and TV and radio channels.

There is also some hope from the commercial and political side. Several of the countries have recently established diplomatic and business relationships with Israel. This is a real turnabout, and hopefully it will allow Bible-believing missionaries into some of these formerly very closed and dangerous countries.

Our hearts should break when we realize that the pope and the ayatollahs represent over 2 billion people who are lost in idolatry and pagan deception. One group trusts in their priest for eternal life, while the other is taught that martyrdom is the best road to a perverse eternal bliss.

Today, in America, we have a growing opportunity to reach some of both. Every year, hundreds of thousands of Muslims and Roman Catholics immigrate to America. Many others are U.S. converts. Both mission fields are at our doorstep.

Chick Publications has effective gospel tracts with specific messages for Catholics and Muslims. We also have instructional literature to help in personally witnessing to them.