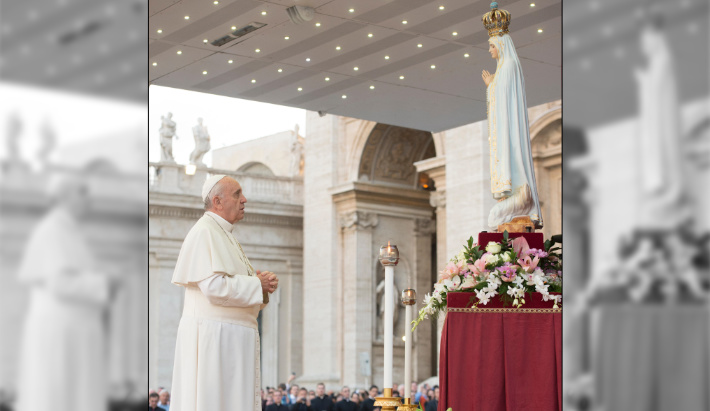 CAPTION: Pope Francis strikes a worship pose to an idol of the Virgin Mary goddess at Fatima.
----------

Those who buy into the idea that Catholicism has changed and no longer qualifies as an unbiblical cult should consider some of the pagan rituals that continue to be practiced. Just before Christmas, Catholics around the world celebrate the Feast of the Immaculate Conception of Mary.

Each year, the Pope addresses the gathered crowd and then visits a shrine of the Virgin goddess to pray before the idol. Vatican news reported excerpts from his address:

“Even she (Mary) was saved by Christ, but in an extraordinary way because God wanted that the mother of His Son not be touched by the misery of sin from the moment of her conception.” … “And so, for the entire course of her earthly life, Mary was free from any stain of sin,” he claimed. “She was the [one] ‘full of grace’ as the angel called her.”

For those who study the preserved scriptures (in English, the KJV), there is so much wrong with this picture. Was the Apostle Paul wrong when he declared that: “For all have sinned, and come short of the glory of God;”? The only exception was Christ, Himself, so that He could take on our sin. For what purpose was Mary exempt? Possibly to enhance her standing as a virgin goddess.

Bible scholars point out that Mary’s offering of doves or pigeons in the temple at Jesus’ presentation to the Lord (Luke 2:22) was a sin offering. Would this have been necessary if she was sinless?

The shift here from “favor” to “grace” seems innocent enough since both have similar meanings. However, Catholicism uses this seemingly slight difference to lift the lowly virgin to goddess status. Pope Francis’ term, “full of grace” in his speech, appears in the worship chant, “Hail, Mary, full of grace…”.

The clear meaning in the preserved Bible is that God has picked this particular Jewish virgin to birth the Messiah. To extrapolate this simple statement into goddess worship is typical of Rome’s mixture of paganism with perverse interpretations of scripture.

But this twisting has become the launching pad for a steady elevation of Mary as a goddess over the centuries. Although the beginnings of Mary worship dates early in the history of false Christianity, major steps were more recent.

“We declare, pronounce and define that the doctrine which holds that the blessed virgin Mary, at the first instant of her conception, by a singular privilege and grace of the Omnipotent God, in virtue of the merits of Jesus Christ, the Savior of mankind, was preserved immaculate from all stain of original sin, has been revealed by God, and therefore should firmly and constantly be believed by all the faithful.”

“We pronounce, declare and define it to be a divinely revealed dogma that the immaculate mother of God, the ever-virgin Mary, having completed the course of her earthly life, was assumed body and soul to heavenly glory.”

And an additional step in her elevation is in the works, that of co-redeemer and mediatrix, presumably helping Jesus to forgive sins.

Few Christian leaders dare expose this counterfeit “church,” but years ago God called Chick Publications to carry that message. Chick.com, provides a wide range of tracts and books to help you guide others out of this monstrous deception.

Other Articles from March/April 2021: