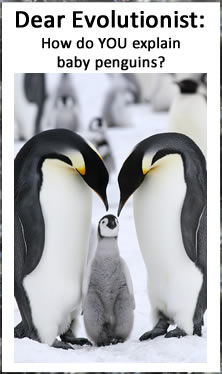 "Where did males and females come from? Creation, or evolution?"

Males are in many ways similar to females of the same species. A few male organs, however, are very different from those in the female. If this were not the case, reproduction could never take place. The differences were purposely designed by our Creator to work together. If males and females were not both different and compatible, we would not have been born, strong evidence that God created both.

Nevertheless, if even a single generation did not have both males and females that fit together and worked together, the whole species would have died out!

Evolutionists believe that gradual, tiny changes added up over time to produce new organs. They can sometimes make it sound reasonable that evolution might have perfected things like hands and legs that are similar for both sexes. But since there is no decent evolutionary explanation for the origin of males and females, their whole theory of evolution falls apart!

We all know that a more highly evolved female does not become a male; nor does a male evolve to become a female. Believers in evolution have no reasonable explanation for the origin of either male or female organs. Compounding their problem is the fact that both males and females would have to have popped up in the same generation, complete with the correct organs that fit each other and were capable of reproduction!

Sexual reproduction could not have evolved gradually over generations because without reproduction there could never have been even one generation. This is true of both people and anything else that reproduces sexually. In every generation, males and females, whether people or animals, had two possibilities: Their sex organs worked or they became extinct.

The very different male and female sex organs obviously could not have evolved one from the other. Neither could they have evolved separately over time! Each depends on the other.

Sex is a great evidence that God, and not evolution, created us. Read Genesis chapters one and two to see how He did it!

Thomas Heinze is the author of a paperback, How Life Began, which describes the incredible complexity of even basic forms of life and the myriad types of building blocks used. With this evidence, he shows that the probability of life forming spontaneously in some primordial soup is beyond calculation. In The Vanishing Proofs of Evolution, he ticks off the basic "proofs" that evolutionists use to make their point and shows how each has been debunked by true science.

Heinze invites anyone who wishes to discuss evolution to email him at heinze@hevanet.com

Other Articles from March/April 2011: