Simple Cells? Not Any Longer! 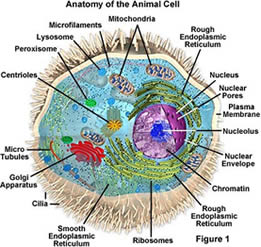 Once upon a time, people did not know that cells were very complex. Early microscopes let man look at drops of stagnant water and see little blobs scooting around, but cells looked simple. They assumed that after the first cell had just popped up somehow, the other cells evolved from it.

But we have learned that living cells are far too complex to just pop up! Now we know that a blueprint for the entire human body is contained in the DNA in each cell. Plus, each cell contains thousands of complex proteins. Nevertheless, most evolutionists, even today, claim that life began when some chemicals got together and the first living thing just popped up complete with whatever it took to make it work. But they haven`t a clue how this could have happened.

Today, they have to admit that cells are too complex to have popped up by themselves. But since they don`t want to believe that there is an intelligent Creator, all they can do is pass along their old tradition that a first cell popped up when atoms accidentally got together.

All the evolutionist can do is try to dodge this embarrassing question: "If God did not make the first living cell, where did it come from?" Scientists can`t just pour chemicals into a test tube and get life. They can get all the right raw materials and assemble them in the correct order and sequence, but what they make is not alive.

Evolutionists can try to avoid answering by saying that, as scientific technique gets better, the answer will come. But the more the scientific evidence piles up, the farther they find themselves from the answer. The incredible design and complexity of a single cell demands an intelligent Designer. Someone has said that even the space shuttle is like a simple child`s toy compared to a living cell.

Look at a living mouse. It has been put together correctly or it wouldn`t be alive. If you kill the mouse, it still contains all the necessary ingredients, perfectly assembled, but you can`t bring it back to life.

In my book, How Life Began, I detail the incredibly complex construction of a single cell. Besides the amino acids that form the thousands of proteins that cells are made of, a complete DNA blueprint containing billions of instructions must be present to guide the manufacture of the right proteins and their correct assembly. An inexpensive booklet that summarizes this concept called In the Beginning...Soup? is also available from Chick Publications for use in church, Sunday school classes, or to give to neighbors and friends.

One by one, God is removing evolution`s props. Evidence of evolution is non-existent. Myths that evolutionists have tried to use as proofs are vanishing one by one. My book, The Vanishing Proofs of Evolution, takes on each of these "proofs" showing that they are only smoke and mirrors by those who refuse to submit to the Creator.

To help you expose this lie, Chick Publications also has tracts like Big Daddy and In the Beginning.

Other Articles from July/August 2010: