You Probably Know This Woman! 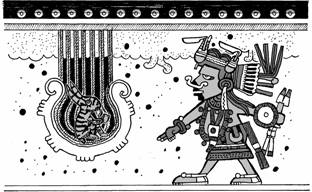 To the Aztecs, she was known as Tlazolteotl (TLAS-ohl-tay-OH-tul), the goddess of filth, gambling, prostitution and witchcraft, among other things. She was also known to the Aztecs as Coatlicue (co-AT-li-KWAY).

In the form of Coatlicue, she was a "virgin goddess" who became pregnant. The son she bore was supposed to be Huitzilopochtli (WHIT-sil-oh-POHKT-lee), the chief god of the Aztecs, reincarnated as a baby.

She was the goddess of the moon and of the morning/evening star (Venus). People who spoke different languages called her by other names. Some of them are Hecate, Astarte, Ishtar, Aphrodite, Venus, Isis and Semiramis.

She is also known as the Roman Catholic "Virgin Mary" goddess.

Her son had many names as well. Some of them are Horus, Harpocrates, Mithras, Sol Invictus, Hercules, Attis and Tammuz. What do these god-babies have in common? Well, for one, they were all born on December 25th.

For another, they are also known as the Roman Catholic "baby Jesus."

Roman Catholicism is not Christianity. It is Satan`s blend of ancient pagan religions made to look like Christianity.

How did people come to worship an ancient goddess as the "Mother of God?" How did her son get turned into the "baby Jesus?" How did all these pagan myths get turned into Roman Catholicism? Am I under her spell? And what does that mean for my Roman Catholic friends and loved ones? Read Babylon Religion: How a Babylonian Goddess Became the Virgin Mary and find out. You will learn the difference between the real Mary and the fake Mary goddess, the Lord Jesus Christ and the fake Jesus god-baby.

It makes a great deal of difference which one you worship. It`s the difference between life and death, heaven and the lake of fire. See for yourself. The truth will make you free.