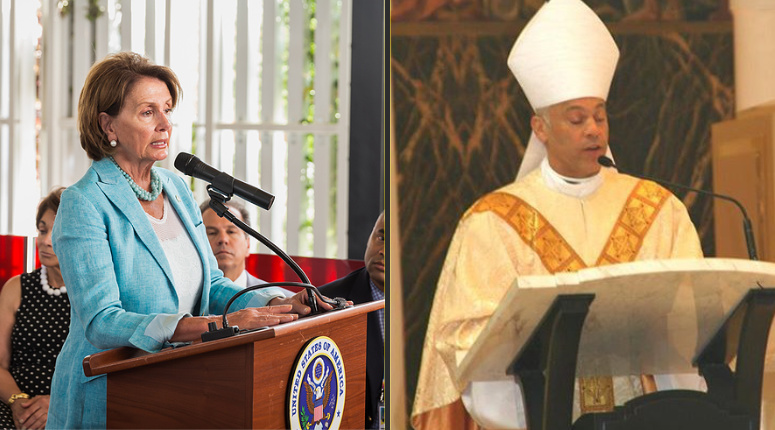 
The recent dustup between House Speaker Pelosi and San Francisco Archbishop Salvatore Cordileone graphically illustrates the Vatican’s attempt to control the salvation and eternal destiny of Roman Catholics. Pelosi’s firm stand in favor of abortion, while profiting from the political advantage of claiming to be a devout Catholic, has long rankled Roman leadership. Other political leaders, including President Biden, have also come under the same pressure.

Biblically, the issue of salvation and eternal life is between the individual and his Creator. But over the centuries this counterfeit church has attempted to assume the power of eternal life over its spiritual slaves. The Archbishop is threatening to withhold communion. So, how does this work?

Communion is the ritual when the priest magically converts a wheat wafer into the “body and blood of Jesus” (the Eucharist). The catechism of the Catholic Church, paragraph 1407 states:

“The Eucharist is the heart and the summit of the Church's life, for in it Christ associates his Church and all her members with his sacrifice of praise and thanksgiving offered once for all on the cross to his Father; by this sacrifice he pours out the graces of salvation on his Body which is the Church."

So we see that in Catholicism the receiving of the Eucharist is essential to salvation. It is a major threat when an Archbishop decrees that communion will be withheld because of mortal sin.

When it comes to sin, the popes have divided sins into several categories. They vary in the levels of punishment required. The most serious is called a “mortal” sin. Murder, (abortion) is in that category. If it is unconfessed, eternal damnation is automatic.

Confession, however, involves presenting yourself in the confession booth with a priest. You state your guilt and if the priest senses an adequate amount of repentance, he will pronounce “penance.” This will involve a few Hail Marys or some other activity. By this method the priest “absolves” (forgives) your sin, which restores you to a state of grace eligible for communion.

As you can see, then, the archbishop’s threat is no small thing to any devout Catholic who believes that receiving the wafer-god is necessary for entrance into heaven.

This chain of bondage has links throughout the lifetime of any devout Roman Catholic. This counterfeit church teaches that babies are born with a sinful nature that must be removed by infant baptism. After that, the Eucharist is withheld until early teens. At that point a special ceremony, called confirmation, is held in which the first communion is elaborately celebrated. The next step is marriage, or holy orders, which forbids marriage.

Marriage requires that both parties be in the state of grace, fully cooperating with the rituals of the church. When children are born they immediately come under this same system.

Holy orders is the sacrament of the vows of a priest or a nun. They agree to give up the God-given joys of marriage and family and commit their whole lives to the dictates of Rome. Over all of this hangs the dark cloud of continually attending mass, confession of sins, penance, and finally a hope that a priest is available for last rites (final confession) before death, currently called anointing of the sick.

Even after death uncertainty continues with relatives never sure that they have obeyed the church enough on the behalf of the departed loved ones so that purgatory is escaped and heaven is completely assured.

Besides this lifetime of bondage of the individual, this counterfeit church has managed to insinuate itself into almost every aspect of politics and world affairs. Revelation 17 and 18 makes it clear that the Vatican will be a major part of the apostate one-world church that merges with the one-world religion that will support the coming one-world government.

Many years ago Jack Chick saw the magnitude of this evil counterfeit. Most other publishers have been seduced by this goddess-worshipping impostor. Chick Publications now has several tracts currently available to help soul winners show Rome’s slaves the truth. For back-up information, there are also several Crusader Comics and over a dozen paperback books including several personal testimonies of their path to freedom.