Is there a Death-bed Window into Eternity? 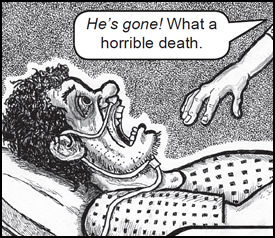 There have always been stories of death-bed agony or ecstasy in the last moments of life. So, when the tract, Kitty in the Window, portrayed a gruesome death scene of a face frozen in horror, one soul winner wrote to Chick Publications with her own story.

She was a pastor’s wife and told how a mother and children received Christ and began attending their church. The husband was violently opposed to the gospel and ordered the pastor off his property. Eventually he prevented his family from attending church.

Later, the family called the pastor to come visit the man who was seriously ill in the hospital, hoping his heart might have been softened. But it wasn’t! He again ordered the pastor away.

As it appeared that the man would surely die, the pastor’s wife called the family to see if she might be more accepted by the man. They agreed to try. She relates what happened:

“The family said yes since he was so sick and probably wouldn’t be mean to me. But when I got there —I watched him die. It was the most awful and frightening thing I had ever seen. He sat up in the bed with his eyes wide open and mouth gaping. His arms flung in the air and he said, “Help me!” The machines then began to buzz, nurses came, and his family was screaming together, ‘He went to hell! Oh, God, he went to hell.’ The nurses closed the man’s eyes and put his hands down to a normal position. As long as I live I will never forget that death.”

Someone has reasoned that modern medicine has changed this so that we rarely see this today. Most people die in hospitals where they are carefully monitored and given sedatives in the last hours, dulling the senses and “allowing a peaceful death.”

But this may be denying us strong evidence of the reality of the hereafter. One Chick Publications staff member, who grew up in Mexico, said that such portrayals of distress, or bliss if they are believers, are common where she lived.

One research file obtained on the internet listed hundreds of deathbed stories, posted at http://www.cuttingedge.org/shaw/. The book is old but the experiences are timeless and descriptions highly detailed. Some are even of famous “infidels.”

Other accounts are of famous believers who displayed great joy at being welcomed by angels or deceased family members.

Part of our witness as believers is to remind people of the long view. Life does not stop at the grave as evolutionist and humanists would have us believe. Satan’s answer to these death-bed experiences is hallucinations of the expiring mind, but man cannot escape the spirit within that whispers otherwise.

And when we hand someone a gospel tract that speaks to that vacuum in the soul, some will respond to Christ’s gift. Unfortunately, we have no way of knowing who will respond and who will reject the message. That’s the reason Jesus used the parable of the sower to show the need to spread the gospel seed widely.

Over the centuries, gospel tracts have played a major part in preparing people for revival. Never has there been a more desperate need for revival, than now. More and more missionaries are discovering that if they saturate a community with Chick tracts, they often get sufficient response to start a congregation. One missionary couple has started four churches this way.

Chick Publications has thousands of testimonies on file witnessing to the power of gospel tracts containing the word of God delivered inside an engaging story.

We will all die.

One little tract can be used by the Holy Spirit to turn agony into bliss at that time.