Missionary Bill Eubanks has just returned from Nairobi, Kenya where he showed an English version of the Chick Gospel video, The Light of the World and led 1200 people to Christ. He showed the video 12 times on a truck-mounted screen to 5600 people in some of the impoverished suburbs. This is a remarkable response considering that only the doctors, lawyers and business leaders speak English. 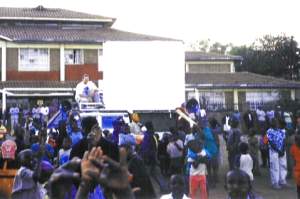 His small outreach team of six people each carried 1000 Chick tracts in their luggage. In the daytime he would preach through an interpreter from the tailgate of the truck and at night show the video on a screen mounted above the truck.

At one point, he was so thronged by the crowds wanting the tracts that he had to just throw them up in the air and scoot out of the way to keep from getting injured. His heart was broken by both the spiritual and physical hunger of the people.

He asked one pastor whether the people tithed to support the church. The pastor said yes but they often come back in the middle of the week to ask for it back so they can buy bread for their families.

Eubanks has led teams on short-term missions trips to several countries. He showed The Light of the World many times during a trip to Mexico City a few months ago and over a thousand were saved. But he could not shake the need of the people in Kenya. Islam is on the march in Africa but he says that it has not reached Kenya yet. This was a scouting trip, to learn how best to make an impact. He is planning a much larger team for another trip in February but his cry is for The Light of the World in Swahili. There is not much time to raise the $5000 needed. After the funds are available, a translator and narrators must be located and the narration combined with the music and video film.

Amazing Grace Tract Fellowship has raised funds to supply millions of tracts for Eubanks and other missionaries in over 40 countries. Now, they have caught the vision of the power of The Light of the World in communicating the gospel. Translations in French and Napli are funded and underway. Other requested languages beside Swahili include Cambodian and Thai.

Other Articles from November/December 2004: