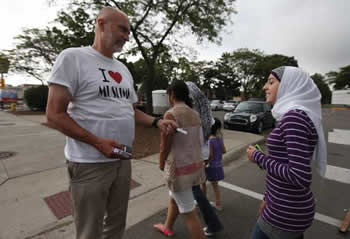 This year, the Arab International Festival in Dearborn, Michigan was again targeted by two types of Christians. And the news media picked up both stories. In one, Christian "protesters" charged in waving confronting signs and placards and carrying a pig`s head on a pole. The other was Tim Berends, a six-foot-tall guy wearing a warm smile and a I-(heart)-Muslims T-shirt.

While the "protesters" were ducking rocks and bottles, Tim quietly moved through the crowds handing out Chick tracts to booth keepers and spectators alike. By the end of the 3-day festival, that attracted over 300,000 attendees, he had salted 4000 copies of the tract, Unforgiven into the hands of mostly Muslim people.

The T-shirt, with "John 9:35-38" on the back, attracted much attention with some Muslims asking where they could get one. Tim would walk against the flow greeting people with a smile and the Arab greeting, "As-Salamu Alaykum (pronounced, aah suh laah mu aah lay kum) which means "peace be upon you" and hand them a tract. Often a family would approach and the father would ignore Tim but, behind her husband`s back, the wife would reach for the tract.

One young lady demanded why he was there trying to cram the Bible down their throat. He replied: "I truly believe in heaven and I truly believe in hell. I wouldn`t be here if I didn`t believe that Jesus said, 'I am the way, the truth, and the life: no man cometh to the Father but by me.` But I love Muslims and want them to come to trust Jesus." This "soft answer" turned away her "wrath" and she wandered off.

The group of Christians who wore T-shirts and carried signs with scriptures immediately drew a hostile crowd. When the crowd got unruly, they requested police protection and were told there were not enough officers available. The crowd became abusive, shouting profanities and throwing rocks, bottles, and eggs. Eventually the Christians were escorted out and threatened with citations for "disorderly conduct."

Last year, Tim used the same quiet, unobtrusive technique to distribute 1800 tracts at the festival while the same group used confrontation and met with similar resistance. Tim demonstrated that sometimes it is better to be "wise as serpents and harmless as doves."

The news media covered both approaches. One showed pictures of the rioters attacking the Christians with the signs. The other was a picture of Tim, standing tall in his I-(heart)-Muslims T-shirt, offering a tract and a smile to a teenage girl wrapped in a scarf. She is smiling back before reaching for the tract.

Granted, Jesus spoke harsh condemnation on the hypocrites of His day for making their converts "twofold more the child of hell than themselves." Most of the ones shouting obscenities and throwing things at the Christians were teens and young people. Would they not have been included when Jesus sat on a hill overlooking Jerusalem and wept for her children? He roundly castigated the leaders, but bemoaned the fact that the common people on the street were like sheep without a shepherd. There is no doubt that sinners need to be confronted with the gospel. However, it is better for the soul winner to show Christ`s compassion while delivering the message and let the tract do the confronting, later at a more private time.

Tim believes that the hundreds of tracts that he was able to quietly put into the hands of the multitude will do much to point the precious Muslim men and oppressed Muslim women away from the hateful god Allah, into the loving arms of the Lord Jesus.