A steep rise in anti-Semitism is occurring in America, with a significant portion in U.S. colleges. "We are disturbed that violent anti-Semitic incidents are rising," observed Jonathan Greenblatt, chief executive of the Anti-Defamation League.

ADL reports that the number of actual assaults on Jews in the U.S. in 2015 was up more than 50 percent over the year before. It tracked 941 incidents of harassments, threats, and vandalism. 56 of those were actual, physical assaults. They believe that there may have been more not reported by the victims. 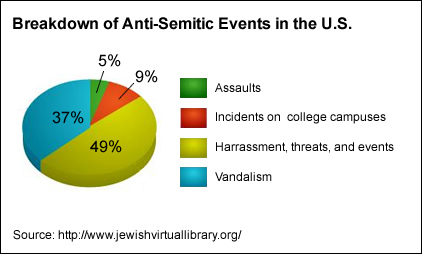 One international group with chapters in many universities is called the Boycott, Divestment and Sanctions (BDS) movement. Wikipedia describes it as a "global campaign attempting to increase economic and political pressure on Israel to comply with the stated goals of the movement: the end of Israel's occupation and colonization of Palestinian land."

The FBI weighed in with a report that 56 percent of the anti-religious hate crimes in the U.S. in 2014 were "motivated by anti-Jewish bias." This compared with only 16 percent targeting Muslims.

Results of this indoctrination in the universities are showing up in the younger leaders in government and business. Relations between the Israeli government and the current White House have become increasingly strained.

Only in the last 75 years has America demonstrated serious anti-Jewish efforts. During America`s founding, George Washington received major help from Jewish merchants. Gratitude for that remained until the early 20th century.

As biblical righteousness began to give way to the cancer of humanism, Hitler`s philosophy spread to this continent. Business leaders such as Henry Ford bought into the white-race superiority doctrine as well as the age-old view of the "Jewish Problem."

At that time, God moved world leaders to open the door for a Jewish homeland in Israel. Amazing stories are told of warring angels supporting Israel`s fight to defend their new home against impossible odds. America`s ambivalence toward the new state appears to have cost one U.S. president his life and disturbed the sleep of other ones.

Chick Publications has produced a new Crusader Comic based on John McTernan`s book, As America Has Done to Israel, an extensive history of America`s dealings with Israel. Both books describe the on-again-off-again attitudes toward Israel and the natural disasters that followed immediately when Israel was pressed to give up God`s land.

Who would have guessed that, during World War II, there was a Nazi training camp on Long Island, New York where a rally held there in 1938 drew 40,000 Hitler sympathizers? Or how many today know that Henry Ford actually bought a newspaper publisher in order to spread Nazi propaganda? Or, that he actually got a medal from Hitler for his efforts?

The Crusader Comic, Unthinkable, along with McTernan`s book, also provide elaborate details of billion-dollar disasters in the U.S. that God seemed to coordinate with anti-Israeli government actions. One president`s home suffered heavy damage by a "perfect storm" the same day he pressured Israel to give up more land for peace.

Zechariah spoke of a day when Jerusalem would be a cup of trembling and a burdensome stone for all people, but He would cut in pieces all who came against it (Zech. 12). Today, we are seeing prophecy fulfilled. Satan`s kingdom is winding down.

Soul-winners, if we are going to bring more souls into the Kingdom of Heaven, we had best get busy. When we consider how God has brought judgment on America for their treatment of Israel, we need to educate the next generation on this. Make sure every teen you know gets a copy of Unthinkable.