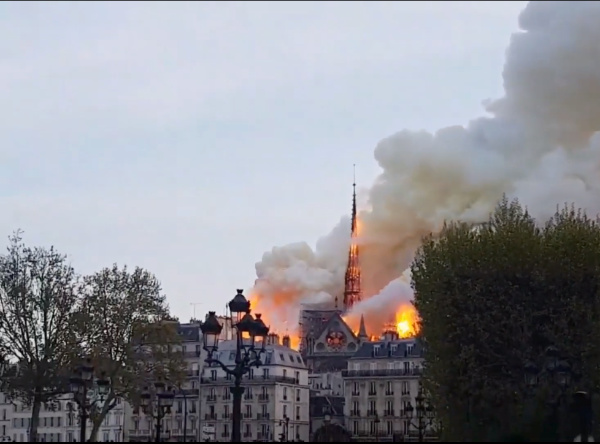 The recent fire at the 800-year-old Notre Dame Cathedral in Paris exposed some of Roman Catholicism’s dirty laundry and unbiblical rituals. News of the progress of the fire carried deep concern over some priceless “relics” endangered by the flames.

One was supposedly the crown of thorns worn by Jesus during the mocking by the Roman soldiers. Another was a splinter and a nail said to be from the cross.

The story of their rescue emerged after the fire was extinguished. A fire department chaplain, who happened to have keys and access codes to the cathedral, organized a human chain to get the relics out of the burning building.

One archaeologist from Dartmouth College, Ted Henderson, described the history of the crown of thorns relic. Although its authenticity cannot be proven, its tracible history dates back to around the 5th century. Henderson claims that in the scramble for ownership, the relic was considered at the time to be “the most valuable single object on the face of the earth.”

The Roman Catholic practice of relic worship is common to most of the other pagan religions. It is part of the Vatican’s bondage strategy of diverting attention away from a genuine relationship with the Holy Spirit. Such distractions always involve some form of idolatry: worship of the creature (creation) more than the Creator. (See Romans 1:25.)

Those who invent idol worship must come up with a highly detailed worship system to keep the subjects occupied so they will not learn the simplicity of salvation by faith. Roman idolatry is no different. Relics such as the crown of thorns and piece of the cross rescued from the Notre Dame fire were considered “first-class relics.”

Items of this highest order are directly associated with the events of Christ’s life (manger, cross, etc.) or the physical remains of a saint (a bone, a hair, skull, a limb, etc.). On the other hand, second-class relics are items that the saint owned or frequently used, for example, a crucifix, rosary, book, etc.

Third-class relics include any object that has been touched to a first- or second-class relic. To be official, every Roman Catholic building with an altar, whether local church or mighty cathedral, must contain some form of relic. Google “reliquary” and you will get many, many pictures of ornate boxes used to display these relics.

The false foundation of this idolatry is the Vatican’s teaching on saints borrowed from the pagan belief in many gods. Instead of Jesus being our only Advocate, thousands of dead people are “beatified” and “canonized” to encourage the “faithful” to pray to them for favors. “Patron saints” are in charge of everything from accountants (St. Matthew) to Venezuela (Our Lady of Coromoto).

Besides the attention to relics, the fire at Notre Dame reminded some historians of events in the early days of the cathedral. The first stone of it was laid in 1163 about the time of the rise of the Albigenses. They were some of the early critics of Roman Catholicism, provoking a deadly reaction.

So great was the threat that Pope Innocent III called for a crusade against them, declaring them heretics. When they refused to return to Mother Church, Catholic warriors exterminated the Albigenses, killing men, women and children.

Another band of “heretics,” the Huguenots, was also massacred on St. Bartholomew’s Day in 1572. The popes used the promise of indulgences, get-out-of-purgatory-free cards, for those who killed a Protestant.

So, for some, attention to the destruction of the Notre Dame Cathedral conjures up fearful memories of a lot of blood spilled in its shadow. To them it is a symbol of hatred in a world hoping for peace.

Soul winners, we need to bring the simple gospel of faith in Christ alone to those around us who trust the pope to get them to heaven. Chick tracts and books are proven effective to do this job.

Other Articles from July/August 2019: