How Good is Your Ruler?


One day, a printer in the Chick Publications print shop was laying out a template grid on the light table for a printing job. Puzzled that his dimensions kept mismatching, he decided to compare the two rulers that he was using. He discovered that they were different. The one-foot measurement on one ruler was slightly longer than the other one. It was no wonder that his template would not match.

So, which one was right?

He knew that there was no way to know for sure, short of visiting Washington DC where the Bureau of Weights and Measures maintains standard samples.

Realistically, the only thing he could do was compare the rulers to other rulers in the shop and other dimensions on the printing press and decide which of his two rulers would work the best.

This illustrates a quandary that we have in relation to Bible versions. When one of your Bibles contains Acts 8:37 and another one does not, where do you go to determine which one is correct?

The answer to this is not an easy one. Some people prefer to do it like with the rulers. Compare your Bible to everybody else’s Bible and see what most of them seem to agree on. Most people in the pew would simply go to their pastor and find out which one he recommends. However, if you’re a pastor, how do you know that your recommendation is the best?

Some pastors will sort of brush aside the question, assuring that all the Bible translations are good because we trust the scholars. Others, who realize that this is a non-answer, may fall back on their denomination’s preferences.

Let’s face it, there is really no way of knowing which ruler or which Bible is trustworthy without knowing their history. Any ruler that doesn’t have a history going back to the standard in Washington DC is likely to be defective. But with the Bible we can’t go back to the original. We have to trust those who have copied the originals and brought them down to us. But it is hard to trust the history without knowing the details.

Author and linguist David W. Daniels set out to learn for himself the most accurate history of the Bible. He discovered there were two streams of manuscripts that culminated in two competing histories. One proved to be the record of faithful translators and copyists. The other one contains shady characters and is riddled with confusion and erroneous assumptions. Only in the last couple of decades have research tools been available to obtain this accurate assessment of the histories.

But because of Daniels’ 15-year effort we now have a much clearer picture of the history of our Bible. The library of books that he has produced contains minute details and irrefutable reasoning. His attitude is: here is the evidence; it is up to the reader to decide which Bible can be relied on for one’s eternal destiny.

Just as rulers must have a standard somewhere, so must Bible readers have a standard text that can be used to test the accuracy of all other translations. Without it there is only doubt and confusion. That standard must have a provable history of honest people with the right agenda.

But we must be aware of the other history of dishonest people who were following Satan’s agenda that he started out with in the garden of Eden, the twisting of God’s words. Daniels’ book, Did the Catholic Church Give Us the Bible?, provides a good start in understanding these two histories. Daniels says: “The only history that does not include a lot of shady characters and fake manuscripts is the one that gave us the King James Bible.”

To learn more about Bible versions, please visit our resource center that contains many informative articles on topics like:

Read more about the two streams of Bibles and see how God preserved His Words through the centuries. 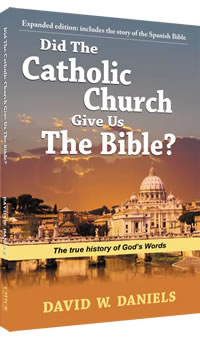 Description: The Bible has two histories. One is of God preserving His words through His people. The other is of the devil using Roman Catholic "scholars" to pervert God’s words and give us corrupt modern Bibles.

Other Articles from September/October 2021: