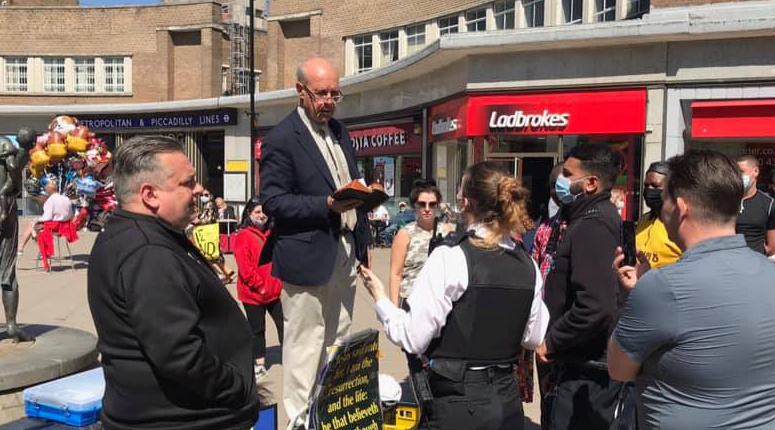 CAPTION: Pastor John Sherwood tries to reason with local police before being arrested for preaching on the Biblical definition of marriage.
----------


Over a year after his arrest, a 72-year-old street preacher in the UK has been cleared of a charge of causing “alarm and distress.” Pastor John Sherwood was preaching on the street on the Biblical definition of marriage from Genesis 1:27-28. Someone in the audience was offended and called the police.

Sherwood cited freedom of speech laws when the police ordered him to stop using language that offended “gay” listeners. They declared that he was resisting arrest, and forcibly removed him from the ladder that he was using for a podium.

Sherwood was held overnight at the police station and charged with a violation of section 5 of the Public Order Act, which outlaws “threatening or abusive words or behavior likely to cause harassment, alarm or distress.”

Christians supporting pastor Sherwood filled the public gallery at his trial where he was acquitted by the Uxbridge Magistrates’ Court.

Another bold Christian has been acquitted by a court in Finland in a case that has gained much more international attention. Paivi Rasanen is a member of parliament, charged with “crimes against humanity” for producing a 2004 pamphlet entitled “Male and Female He created them: Homosexual relationships challenge the Christian concept of humanity.”

“In addition to the pamphlet, Rasanen faced criminal charges for a 2019 tweet criticizing the leadership of the Finnish Lutheran Church for supporting LGBT pride month and sharing her beliefs about homosexuality in a radio show appearance that same year,” reported the Christian Post.

In April, the Helsinki District Court threw out the charges against Rasanen, stating that “the government should not be interpreting biblical concepts.” Unfortunately, the prosecution is not finished with her. They are appealing the verdict to a higher court. If convicted she could face the possibility of six years in prison for sharing her Biblical beliefs.

In America there are many people who would wish to impose the same kind of restrictions on biblical speech. Yet we have the blessing of a solid constitutional right to free speech. Jesus would say that that is daytime when we should be working. But He predicted that it would not be permanent, but the night would come. Chick tracts are a great way to carry out the Great Commission —while we have the day.

Other Articles from May/June 2022: