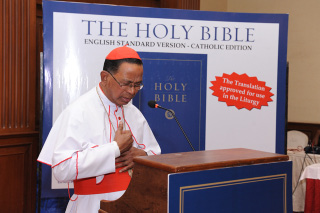 ESV (with Apocrypha) approved for Catholic use, even in the Liturgy.

The popes have always had a different Bible. At first this counterfeit church insisted that the Bible could only be in Latin. That way they could control the masses who did not have a Bible in their native tongues. They had to take the priest’s word for what it said. Amazingly, some of the priests could not even read Latin! The blind led the blind.

The Reformation broke their stranglehold. But they have continued to scheme by destroying trust in God’s words. They had a long-term con. They convinced people that they could “date” a manuscript by looking at it. Then they conveniently found “older and better” manuscripts with changes favorable to their baptized pagan doctrines. Their success was phenomenal. Jesuits like Cardinal Mai, scholars like Westcott and Hort, translation influencers like Eugene Nida and publishers like Thomas Nelson produced a common text, “acceptable” to Roman Catholics, Eastern Orthodox and unsuspecting Protestants.

As I wrote in Why They Changed the Bible: One World Bible for One World Religion, Eugene Nida was very useful to the popes. Standing at the crossroads, he was deceived enough to believe that Protestants and Baptists should merge with the Roman Catholics and Orthodox to create one acceptable Bible.

The move of the Vatican has been both simple and subtle. First, the Protestants and Baptists were made to accept Roman Catholics’ help editing Greek and Hebrew texts of the Bible. Second, they started to accept the additional books of the Roman Catholics. And finally, they pushed the extra additional books of the Eastern Orthodox. That way we could all be one big, happy (dysfunctional) family. One world Bible for one world religion.

Think that’s too crazy? Look around. You can purchase a Roman Catholic version of the English Standard Bible, the Living Bible, the RSV and NRSV. They contain 7 additional books and 3 additions to existing books. These are commonly called the Apocrypha, but they prefer to label them “Deuterocanonicals” (meaning “a second canon,” or list of accepted Bible books). That raises the total to 73.

And the Common English Bible also adds extra books of the Eastern Orthodox, for a total of 80. The CEB contains contributions by 9 Fuller Theological Seminary professors, including the Dean of the School of Theology! We are not that far away right now from a Bible acceptable to everyone —except those who know the history of this attack on God’s words.

This is the result of the second, corrupt stream of Bible history, described in Did the Catholic Church Give Us the Bible? The pure stream led to an enduring English Bible that God preserved, which God has used for over 400 years, bringing revivals and worldwide missions: the King James Bible. What is described above is the chaotic result of Satan’s diabolical use of the second stream, the one that comes out of disbelieving Alexandria, Egypt. Satan created this stream through unbelieving men, to prepare a glut of counterfeit Bibles for a counterfeit church to use in the End Time.

What we need is a revival of faith in God’s inspired and preserved words, in English, the King James Bible. Anything less will not do. People are falling for the Devil’s four-step plan: confusion, doubt, disbelief and rebellion. They need to be able to trust in just one Bible to find God’s will and best life for them. Please pray with me for that needed revival. And do what you can to get out the truth. You may also be a man or woman at the crossroads —but for God.

Other Articles from January/February 2020: