Pat and Windy Caspary find lots of variety in their Thailand mission field. Sometimes it's a throng of students begging for tracts. Or a temple full of hideous idols and lost worshipers. Or they may be riding a fishtailing dirt bike up muddy hills to deliver the gospel to remote villagers deep in the jungle. 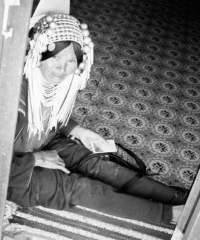 Somber youngsters eagerly accept the tracts in their language. Oldsters with pleading eyes, begging to be unburdened from years of pagan superstition also read the good news of Jesus for the first time.

Pastors of blossoming local churches invite the Casparys to challenge their congregations in evangelism. After one meeting, the pastor asked for 10,000 tracts to equip his people to reach their neighborhood. 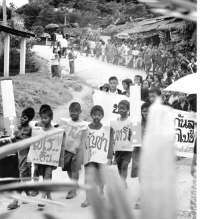 Then there are furtive crossings into China with suitcases packed with Bibles, CDs, tapes and other literature. The Bibles would ultimately end up in the hands of graduating university students.

Other literature went to 45 youngsters in an orphanage in the hills. But the need was more than books and the Casparys pledged to help with building additions and repairs. 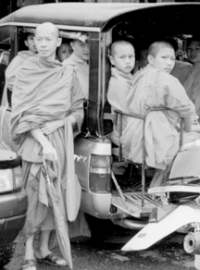 They write, "If you saw these places and saw these faces, it would impact your heart for Missions forever!" The accompanying pictures give us a glimpse into just one mission field. Thousands of other missionaries face a similar hunger for the Truth. Literature in the native languages can greatly multiply the reach of a missionary.

Does your church support missionaries? Chick Publications has tracts in over 100 languages. Tell your missionary to visit the Chick web site and chose tracts in the language of his field. Then you can order the tracts to be shipped directly to the missionary.

Other Articles from January/February 2003: