Brothers and Sisters in Christ:

Sometimes while we are pushing forward in one direction, God decides to get our attention. He can use any means He wants. But it is always effective. In our new tract, “Is That All?”, Greg is confronted by two unlikely sources: his daughter, who calls him out for always wanting more, and his clever grandmother, who finally gets his attention after she dies.

In the following letter, “Java Jack” tells us how God used Chick tracts to grab his attention, and later for him to use to witness to all his customers. I hope both the new tract and this testimony will encourage you to find creative ways to witness to others. Let’s get the gospel into as many hands as possible. You might be the tool that God wants to use today!

My wife and I were raised in families that went to church. However, these churches never taught the infallibility of God’s Word. When I was ten years old, I was already a troubled youth hanging around the wrong people in the local mall.

I remember seeing what looked like a small comic book by a pay phone. Upon picking it up and reading through it, I realized that this comic book was a message from God. This was my first exposure to a Chick tract, and it freaked me out.

Even though I was not ready to receive this message, I brought it home and put it in my desk because I knew it was from God and He was watching. Actually, a few weeks later, I came across another tract and stayed clear of it. I knew it came with a responsibility that I was not willing to accept, yet.

My wife came across one at a blood pressure machine in Kmart when she was twelve. She read the tract but then left it in the same place she found it and walked away. It wouldn’t be until many years later that we would realize the significance of Chick tracts in our lives.

Upon meeting each other, falling in love and starting a family, it was my wife that felt the Lord calling her to go to church. After trying for several weeks to get our family to go to church she finally gave me the ultimatum of attending church with her and my children next Sunday or they were going without me.

So, I did what every man would do and drove an hour and forty-five minutes to the church I was raised in. This church felt like home and brought back good memories. There was still a problem, they didn’t believe that the Bible was the infallible Word of God.

As a family we started praying and reading God’s Word. God eventually used a series of events to bring my wife and I to the point that we were on our knees and all we could do is look up and cry out and believe on Him. As we continued reading God’s Word and praying, His Words became alive to us. I remember my wife saying, “The Bible is alive and true and is God’s Word.” On April 4th, 2004 I accepted Jesus as my savior. Upon becoming believers, the devil did everything in his power to shake our faith and have us turn away from God. By that time our lives were unbelievably complicated.

I was a broker and my wife sold vanity in our salon and day spa. The life we then lived was built on sin that went against everything we believed. My wife changed how she dressed and spoke, and even the music that played in our businesses; and was now trying to witness to customers, employees and family. 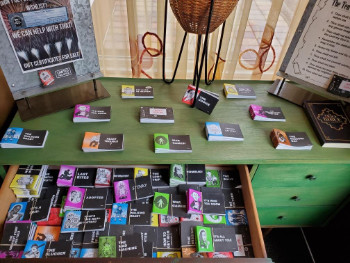 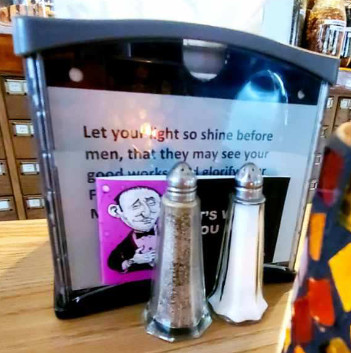 That was when God laid it on our hearts to buy a local building and open a coffeehouse. The name of our coffeehouse is Out Of The Grey Coffeehouse Café because we call on the world to come out of the grey and into the truth. At the coffeehouse, we spread the Gospel by offering free King James Bibles and placing Chick tracts everywhere, including the entrance, tables, and bathrooms, which we constantly refill.

There are countless examples of kids, college students and adults talking to us specifically about these “little comic books.”

In addition to the coffeehouse, we roast and sell organic coffee and tea online at OutOfTheGreyCoffee.com and KingJames.coffee These coffees and teas, with Scriptures on them, ship around the world. We even have opportunities to share the Gospel with coffee growers and producers in their native lands.

We thank God for obedient men and women that follow His command, we look forward to seeing you all in heaven.

Other Articles from November/December 2019: