Jose Vizinho stands in front of one of the deli counters of European Meats in Toronto, Canada. He is manager of the deli and uses it as a backdrop for his "Love Revolution Ministries." 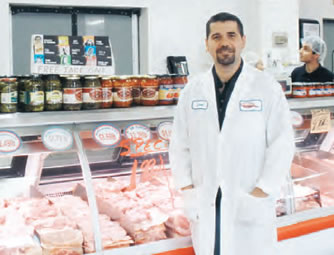 Notice the Chick tract display on top of the meat case. He has distributed over 10,000 tracts to his customers.

His ministry includes outreach to the poor and homeless.

Three times a week he visits them on the streets handing out free bags of deli sandwiches with a gospel tract. On each bag is a sticker: "MAN SHALL NOT LIVE BY BREAD ALONE, BUT BY EVERY WORD THAT PROCEEDETH FROM THE MOUTH OF GOD."

He holds free barbecues in a local park where the homeless, prostitutes and poor can also get a hamburger and drink plus a Chick tract.

Parked at the base of a tree is a box of Chick tracts in over 60 languages so he will not miss getting the gospel to anyone because of a language barrier.

In his spare time, he and his wife will visit some of the local hiking trails and leave tracts conveniently positioned in the nearby bushes to be easily noticed by passing hikers.
Or they will slip tracts through a rubber band and hang them on the door knobs of houses or apartments.

Just one man with a heart for God, doing his bit to meet his neighbor`s need for food for both soul and body.