Philippines
Missionary Bruce Hunsaker sends his thanks for all your help providing tracts for the growing work there. He is leading street evangelism, now working with 14 local churches. He writes: "The churches who have a burden for public ministry say they are encouraged to go out because they have something to offer their people to help them. The people are stopping to read and have plenty of questions."

This is how these tracts make a difference in this important street work. So many Christians are afraid to witness because they don't think they will have the right words, or answers for people. But anyone can give out a Chick tract, knowing it will deliver the simple gospel in a way that gets attention. And when they see people stop what they're doing to read, they know it's going to have impact. Then when they begin asking questions, workers know the Holy Spirit is speaking to people's hearts. This works! 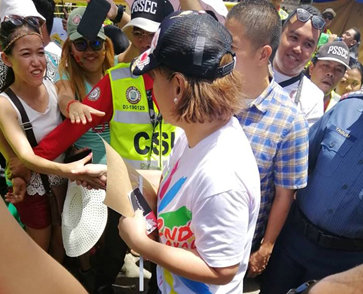 The lady in the picture who just received a tract is the mayor of the city of Davao, where Hunsaker lives and works. May God open her heart and bring her to peace. The freedom that Christians are enjoying in this nation is amazing! By the time you read this newsletter, he and the churches he helps will have placed nearly two million Chick tracts into the hands of hungry Filipinos. Thank you for making this possible.

Rwanda
48,000 tracts were just shipped to a container loading facility for Missionary Larry Nelson. After ministering for years in South Africa, he is now helping to start a new work in Rwanda. Last year, the government established new requirements for pastors of churches. Nelson and his group will help meet those requirements with their new Bible school, training local pastors. In addition to this shipment of tracts, Nelson is planning to translate other titles into Kinyarwanda, the local language, for a big evangelistic push here.

Zambia
Missionary Mike Dobbins believes in literature, and reserves a portion of his budget to buy tracts. But it's never enough. He wrote: "Since 1998 when we came here first we have received 737,000 Chick tracts. That means we are giving out approximately 100 tracts per day, about 3000 per month, about 36,000 per year. That still does not sound good enough to me. Only 100 tracts a day in this environment is not a great job at all. We can do much better. So I am praying the Lord will give us a bigger vision and more funds to buy more tracts. The job is too big to be doing so little."

Thanks for your gifts, we are able to add even more tracts to what Mike can purchase, to help him with his big vision to reach more Zambians with the message that will change their futures.

Netherlands
Stan Kamps, veteran missionary with BMFP, works in Almere, Netherlands, just outside of Amsterdam. He writes: "Our own city of 200,000 people is our first priority, but we have people coming from all over our country... People from 170 nations of the world call Almere home." Thanks to your giving, there are now 70,000 tracts on board a ship heading for Amsterdam, and then on to Almere.

Mexico
80,000 Spanish Chick tracts are now being printed for Missionary Tim Urling for an upcoming outreach. Here is a picture of a man who has received a Chick tract from him. 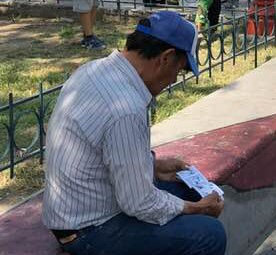 Other Articles from May/June 2019: