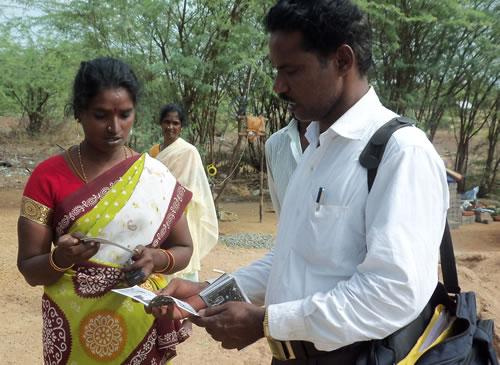 The Chick Missions Fund has worked closely with the Independent Church in India (ICII) for several years, supplying over 700,000 Chick tracts in Hindi, Tamil, Telugu, Punjabi and other local languages.

ICII works quietly at the most grass-roots level. Local Christians are trained as missionaries who visit villages, preaching and sowing gospel literature. When a few people convert, a pastor is trained to disciple them and Bibles and more literature is supplied. The simple gospel in Chick tracts not only wins souls but provides basic training in discipleship.

Persecution is rising rapidly there with elections putting militant Hindus into positions of power. One pastor reported constant death threats. One day, a bulldozer showed up to destroy his house. Another time, while sleeping, a cobra snake was thrown into his room. Snakes were also thrown into his church during worship.

Another pastor reported that he was handing out tracts in a tribal village given over to ancestor worship and blood sacrifices. He found a woman who was dying of kidney failure. About 10 people were gathered “…doing all of their dark rituals over her.”

He began sharing the gospel and then asked them to pray with him for the lady’s healing. “When we prayed, this woman sat up and started to pray, also. God totally healed her at that moment! She expressed, ‘I am feeling very healthy now.’” Doctors later confirmed her total recovery.

Another pastor describes how he visited a village and found an old temple prostitute who had cancer. She was training her 13-year-old granddaughter to replace her. He prayed for healing and shared the gospel. Both accepted Christ. When he returned home he was so burdened for the teenager that he returned and invited her to come live with the pastor.

She is now one of four that the pastor has rescued from the same fate, now living in his church. He learned later that, when the lady went to the doctor, she was completely cancer free.

Another pastor focuses on the stonebreakers who labor in quarries breaking boulders into usable stone. As he approached one day, a young man was standing on a high rock. “I saw him and felt in my heart that something was not right,” he said. It turned out that he was planning to jump to his death. After receiving Jesus, he told the pastor: “You just saved me in time.”

While one native missionary was preaching at a village, an atheist began heckling him, but he accepted a Bible when the missionary left. Upon a return visit, the man came and admitted that it was now “…very clear to him that God created the world and that he believed in Jesus.” After hearing more of the gospel, he accepted Christ and is now regular at church and is “…reading the Bible to many people in the village.”

The ICII report cites many other instances where gospel literature and Bibles work a powerful change in people’s lives. They are pleading for more literature and Bibles to use in both India and neighboring Pakistan. As of press time, our printers in India are producing 350,000 more tracts for this ministry.

Other Articles from July/August 2017: