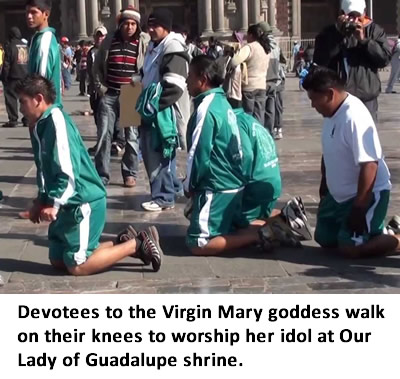 Nowhere is Roman Catholicism’s pagan idolatry more visible than in Mexico during mid-December. An estimated 9 million people make the pilgrimage to the Virgin of Guadalupe shrine in Mexico City to pledge their trust to the Virgin Mary goddess.

But the devil behind the idol is not nice. Part of the tradition of the ritual is to curry the goddess’s favor by walking on your knees across the huge plaza before viewing the peasant’s cloak imprinted with a supposedly miraculous image of the goddess.

The cloak is behind bullet-proof glass above the altar of the basilica housing the image. Four moving sidewalks run below the image, allowing visitors only a brief view, preventing any who would linger. This is necessary to accommodate the huge crowds who arrive for this feast day on December 12th. It is claimed that this is the day in which an apparition of Mary appeared to Juan Diego in 1531, miraculously leaving the imprint on his cloak.

So, what is wrong with this picture? First of all, this celebration is not about Jesus. The attention here is on a substitute Jesus, a manufactured goddess, an insult to the gentle lady who was chosen to birth our Saviour. It is typical of the efforts of the counterfeit “church” based in Rome to hijack man’s trust from Christ and the Bible and point it somewhere else.

This worship of the Virgin Mary goddess is part of a system that includes prayers to dead saints for favors and the kissing of bones and artifacts of relics—none of which is supported by scripture. Contorted interpretations of the Bible are used to justify the bondage of over a billion people who trust the pope to get them to heaven. In some cases, support for these unbiblical practices has to come from the Apocrypha, fairytales added to Roman Catholic Bibles.

How sad that so many, even some who claim to be Bible believers, have fallen for the lie that Catholics just have a slightly different worship style, but are really “Christians.” Since Constantine, the popes have been nothing but enemies of the Bible and Bible believers. In the tragic era of the dark ages, Rome’s persecution of the godly was brutal and bloody.

Since then, their cunning attacks have blunted any attempts to witness the truth to Rome’s deceived. After all, since they are already “Christian,” why give them a gospel tract that might offend them?

Add to that their machinations against the preserved words of God. Research with modern methods has revealed a monstrous plot right under our noses to destroy faith in what God gave us in His word. All modern Bibles are tainted with changed and missing verses that slant the text to be favorable for Roman doctrine. Their text is based on faked manuscripts engineered into place by scholars who doubted that we can have God’s complete words.

God has led Chick Publications to produce tracts and books exposing the cooperation between the Vatican and the spirit of anti-Christ that the Apostle John said was already loose in the world in his time. (See 1 John 4:3.)

Is it not a sign that our love has grown cold when we ignore the eternal danger of the more than one billion people who believe they must work for their salvation, like those on their knees in Mexico City? If we are ashamed to tell them the truth, will not Jesus be ashamed of us at Judgment day?

Other Articles from March/April 2019: