Passing tracts sometimes requires strong faith that the seed will be watered and give an increase that only eternity will reveal. But occasionally stories surface that prove that good, no-nonsense gospel literature will, indeed, do the job. Such a story came to us from James Madden, a Chick distributor in Brazil. He writes the following:

Some years ago I was in a little town called Paulista in PE Brazil. I was at a lunch shack buying something and gave the teller a copy of This Was Your Life in Portuguese (Esta Foi A Sua Vida) I turned around and noticed at a table seated behind me there were two deaf mute people talking, and lo and behold one was sharing the gospel with the other one. The one who was sharing the gospel was using a very old copy of This Was Your Life (Portuguese), going page by page through the book and explaining the pictures and telling the story to the other deaf mute who was not able to read himself... Later, after he was done sharing the gospel I got a chance to try and talk to him.

He had the tract for some years, had received it from a missionary as a young teenager and kept it as a treasure sharing the gospel with many people over the years —reaching people that he could not have reached otherwise. I often wonder at the original missionary who gave him that tract or the people who may have contributed money for the special printing of that print run of tracts. To this day they have no idea how far their gospel has gone out. 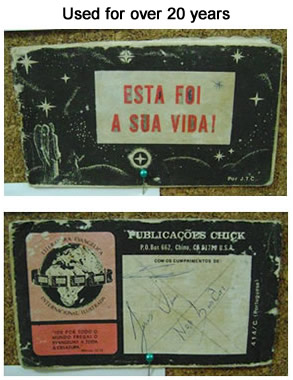 You can see from the pictures that the tract had a lot of mileage on it. Besides, that back cover format was discontinued some 20 years ago.

Another tract that had been stretched to the limit was sent to us with 100 signatures, written in the margins of each page. The owner explained that he did not have money to buy 100 tracts, so he showed the tract to 100 people and when they finished reading it, he asked them to sign their name.

Soul winners tell us that Chick tracts are seldom thrown away, but if a few are, these two stories prove that the others make up for them by doing extra duty.

Another soul winner passed out a few hundred Chick tracts down the beach. Then he came back up checking the trash cans to see how many had been thrown away. He said he was puzzled, because there was almost none in the trash and the people had no pockets in the skimpy clothes they were wearing. Somehow they found a way to hang onto the tracts.

Many Christians feel that handing out tracts is not worth the effort. However, stories such as these prove otherwise.

Even though we may not see immediate results, the tract will do one of two things: either bring the reader closer to a commitment to Christ or stand as a witness against him at the Great White Throne judgment. If he pleads that did not know the way of salvation, Christ will only need to remind him of the day he read the tract and rejected the gospel.

Either way, we know that the tract did its job helping us fulfill the Great Commission.

Other Articles from July/August 2011: