Opportunistic Vatican On The Move Again

The Vatican's Jesuits rarely pass up an opportunity to ride the crest of a global wave. In his newest encyclical, Laudato Si ("Be praised") Jesuit Pope Francis seeks to place the pope as point man in the crusade to halt global warming.

Even though the science community is greatly divided on the cause, Francis sees a "very solid scientific consensus" that the earth is warming and risks disaster before the end of the century. And of course, he places the blame squarely on human activity plundering the earth "for profit" at the expense of the poor and coming generations.

Apparently, Frances has decided to use his bully pulpit to give the world leaders a shove down the road toward one-world government, and, of course, a one-world religion. And his choice of climate change gives him a common theme to focus everyone`s attention. If he can convince the world`s political and religious leaders to join together against climate change, that becomes a platform to work toward global political and religious unity.

This is just another proof that the Vatican is, indeed, the Great Whore of Revelation 17. Since birthed by Constantine, this religious monstrosity has nosed out every opportunity to seduce the kings of the earth into her diabolical bedchamber.

If ex-Jesuit Alberto Rivera were still alive he would surely see Francis`s maneuver as just the latest in the Vatican`s long history of spiritual and political subterfuge.

In the Alberto series of the Crusader comics, Rivera details how the first popes picked up the political momentum of the Caesars in establishing the pontificate in Rome. For a thousand years, kings bowed to their power as they climbed to sit "upon many waters (peoples)" (Rev. 17:1, 15). 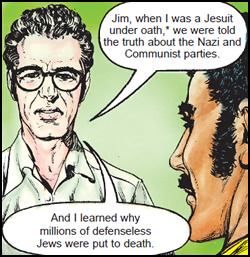 Rivera describes briefings that he received in the Vatican where he was told how the Vatican started political and religious movements to further their power. One early movement was Islam, started by Vatican operatives to subvert the Arab nations to the pope. Things didn't go as planned, but Satan took it over with more than a billion now in Islam`s bondage.

When explorers began to traverse the globe, Jesuits rode along, seducing national and tribal leaders in the Americas and throughout Asia. Their plots to bring all under the power of the pope got them thrown out of dozens of countries.

When the Reformation came along, Rome`s Inquisition left millions dead in the space of several hundred years. The goal was to prevent the common man from reading the Bible for himself. Time and again, God, Himself, stepped in to defend His word and those who fought for it. God`s obliteration of the Spanish Armada is a case in point, along with the foiled Gunpowder Plot.

In more modern times, Rivera describes how Jesuits worked behind the scenes in supporting the efforts of Lenin in Russia and Hitler in Europe. Like Islam, these movements also turned out to be rebel daughters of the Whore of Babylon.

After World War II, Vatican leaders did a rethink. Violent persecution of God`s people had proved futile. So, the tiger slowly began to turn pussy cat. During and after the Vatican Ecumenical Council II (1962-65) a new public face appeared, smiling at the former "heretics," embracing them now, as "separated brethren."*

It is now history how the "Evangelical" leaders have been seduced to believe that the pope is truly a Christian and his perverted Bible is a reliable word of God.

The Jesuit pope is a good apostle of the Father of Lies, seeing a new opportunity to ride the ecology deception to power. But these things "must needs come to pass," before the Man of Sin is revealed.

As Bible believers, it is our task to remain faithful to our Commission: to go make disciples. For centuries, no-nonsense gospel tracts have proven effective in reaching those who have ears to hear.

*For more details on this history, read the Alberto Series of Crusader Comics.

Other Articles from September/October 2015: