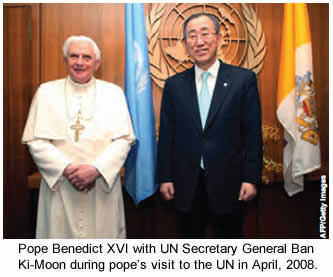 In the present economic crisis, world leaders are increasing the call for a world government. Pope Benedict XVI issued a new "encyclical," or official letter to the world, calling for "reform of the United Nations" so that it would have "real teeth."

It would be charged with disarmament, food security, protection of the environment, and regulation of migration. "For all this, there is urgent need for a true world political authority," the pope states.*

More than one recent pope has pushed this idea, but today`s crises has political leaders joining the call. Over the last half century, the UN has been given increasing authority with peace-keeping duties and monitoring of nuclear programs.

World leaders are requesting that the World Trade Organization (WTO) be given new authority to regulate global financial institutions.

For Bible believers, these are just additional marks on the face of the clock of biblical prophecy. Jesus told us that after a period of prosperity, sin would increase and create chaos and fear in the beginning of the last days.

Another of the pope`s ideas is beginning to get some traction: that Jerusalem must be "internationalized." A possible step toward that has been suggested by one of President Obama`s most influential think tanks, The Center for American Progress.

In a recent panel discussion on the problem of Jerusalem, the suggestion was made that both Israel and the Palestinians appoint an acceptable third party to administrate the city.

Obviously, such a "third party" would have to be acceptable not only to Israel and Islam, but also to the rest of the world. That rules out about everyone but the UN or possibly the pope.

The crises that are developing in the world fit neatly into the prophetic scenario laid out in the Bible: First, a time of prosperity, increase in knowledge and the gospel preached to all nations. At that point, the beginning of sorrows, chaos, fear, and world leaders scrambling to fix the problems.

Troubles increase until a world leader arises promising peace and harmony. But his brand of harmony requires that Christians and Jews be eliminated. The Chick tract, The Beast, and Crusader Comic the Four Horsemen, describe in detail the end-time events that we are facing. The primary message for soul winners is that the time is short and we need to redouble our efforts to reach the lost.