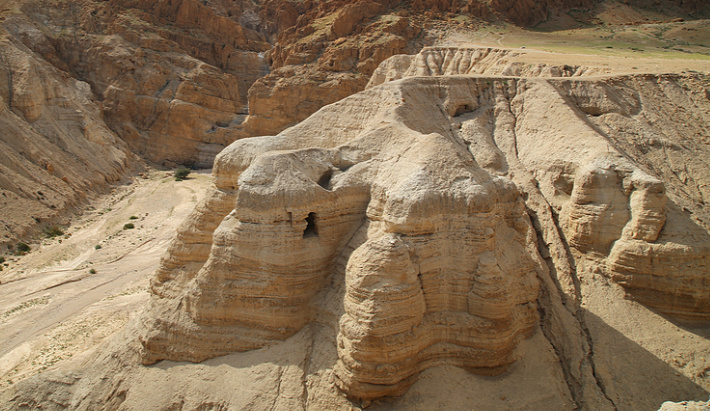 CAPTION: The mountains of Qumran where the Dead Sea Scrolls were found.
----------

God chose to preserve His words for us in the context of provable history. No other world religion has this kind of book. And the spade of the archaeologist continues to dig up proof that it is true.

After Israel became an independent nation over 50 years ago, archaeology was freed to examine the land. But it was a group of shepherds who made the greatest find. Amusing themselves by throwing rocks at openings in the cliffs in the Judean desert, they heard the sound of breaking pottery. There, in a cave, they found sealed jars that proved to contain preserved documents dating back 2000 years.

Written on the documents were almost exact copies of portions of our present Bible. These became known as the Dead Sea Scrolls, or Qumran Scrolls.

The Israeli government has since established an Antiquities Authority to handle all of the archaeological discoveries. And there have been many.

Recently, more scroll fragments were found in a cave that was reachable only with climbing gear. As expected, they contained verses from the Old Testament; specifically, the books of Nahum (ch. 1, v. 5-6) and Zachariah (ch. 8:16-17.)

"These finds are not just important to our own cultural heritage, but to that of the entire world."

This statement is especially true given the power of the gospel of God’s word to change the course of civilization.

Another recent discovery, in 1993, was a stone fragment inscribed with the description of a battle. An Aramean king is boasting of a victory over several thousand Israelite and Judahite horsemen and charioteers. He claims to have killed two kings, a “king of Israel” and the “king of the House of David.” The inscription, called the Tel Dan stela, is not complete on the stone fragment and does not name the kings. But scholars believe that it refers to a defeat of Jehoram and Ahaziah.

The website, biblicalarchaeology.org, has many more accounts of archaeological discoveries that continue to validate the Biblical record. No discovery has ever been found to directly contradict the Biblical account.

With the abundance of search engines and other research tools, many skeptics are setting out to discredit the Bible. But when they are honest enough to follow the evidence, many are converted and have recently written numerous books about what they found.

All this should strengthen our boldness and zeal to counter with Truth the wave of lies engulfing our world.

Jack Chick proved many years ago that the heart of the gospel would fit into a 24-page booklet. And 50 years later, multitudes have testified to their effectiveness. Click this link to see a collection of articles about the testimonies we've received over the years.

No Christian is exempt from the Great Commission. No method of obeying it is easier than handing someone a gospel tract.